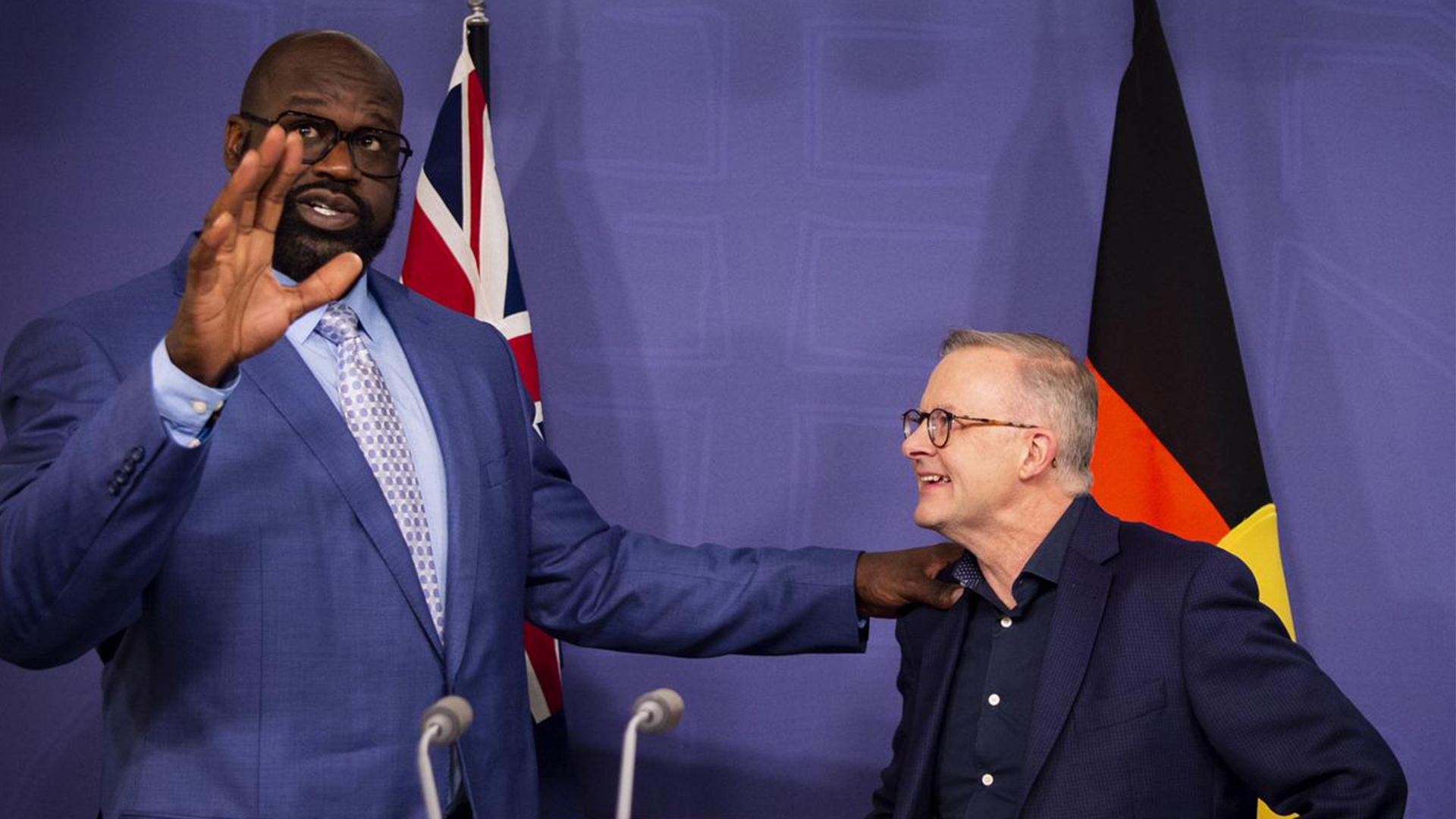 You couldn't make it up if you tried.

After saying he will party with American rapper "Fatman Scoop" when he should be paying respects to our veterans on Remembrance Day, attention seeking Anthony Albanese has made a fool of himself with another American celeb.

Over the weekend, Albo held a bizarre Biden-esque press conference with former NBA player Shaquille O'Neal about changing the constitution to include his Indigenous Voice to Parliament.

The point of all this? No one knows. Even his friends in the MSM had a hard time covering it.

Think about it. There's no African-American "Voice" in the US Congress.

The plight of African-Americans and Aboriginal Australians have practically no cultural or historical parallels whatsoever.

Shaq is the face of an Australian gambling company. Clearly, Albo didn't consider the fact that an estimated 20 per cent of Indigenous Australians are problem gamblers compared to only 2 per cent in the wider population.

And speaking of gambling, we’re betting it was the Aussie taxpayer who paid for the political stunt.

What's next? Will Albo have us pay to roll out Meghan Markle so she can throw in her two cents on the Indigenous Voice?

Should we ask Rafael Nadal to advise us on how to vote at the upcoming Victorian election?

How about bringing Swedish teenager Greta Thunberg to Australia so she can redesign our energy grid?

We're sure the "teal" independents and the Greens would be happy.

This gaffe gives a clear insight into what the Voice is all about.

The Voice has nothing to do with helping Australia's Indigenous populations.

It has nothing to do with bringing Australians together.

And it has nothing to do with making the country a better place.

It's all about identity politics. Yep, the neo-Marxist Left once again playing games, trying to divide us all by race.

It's the idea that all black people – whether African-American, Nigerian, Ethiopian, Haitian, Vanuatuan or Australian Aboriginal – are oppressed, and oppressed in the same ways, by the same white "power structures".

It's the idea that all Australian Aboriginals think the same way, have the same political convictions, and will all feel represented by a Voice comprising career activists and bureaucrats.

It's the idea that certain ethnic groups need special treatment to atone for the past wrongs of previous generations instead of just participating in the democratic process like everyone else.

It's also a morbid distraction from the real issues all Australians have facing at the moment, regardless of race.

Australia is totally reliant on imported fuel, fertiliser, steel and other critical goods.

We are in so much debt, the taxes you pay every year can’t even cover the interest on the debt.

And our young people are coming out of school and university much dumber than before they walked through the front gates.

Perhaps that’s why Albo’s media advisers thought it’d be a good idea to roll out a seven foot tall American basketballer to discuss changing and politicising the Australian constitution. Only a bloke as big as Shaq could cover up Albo’s failure.