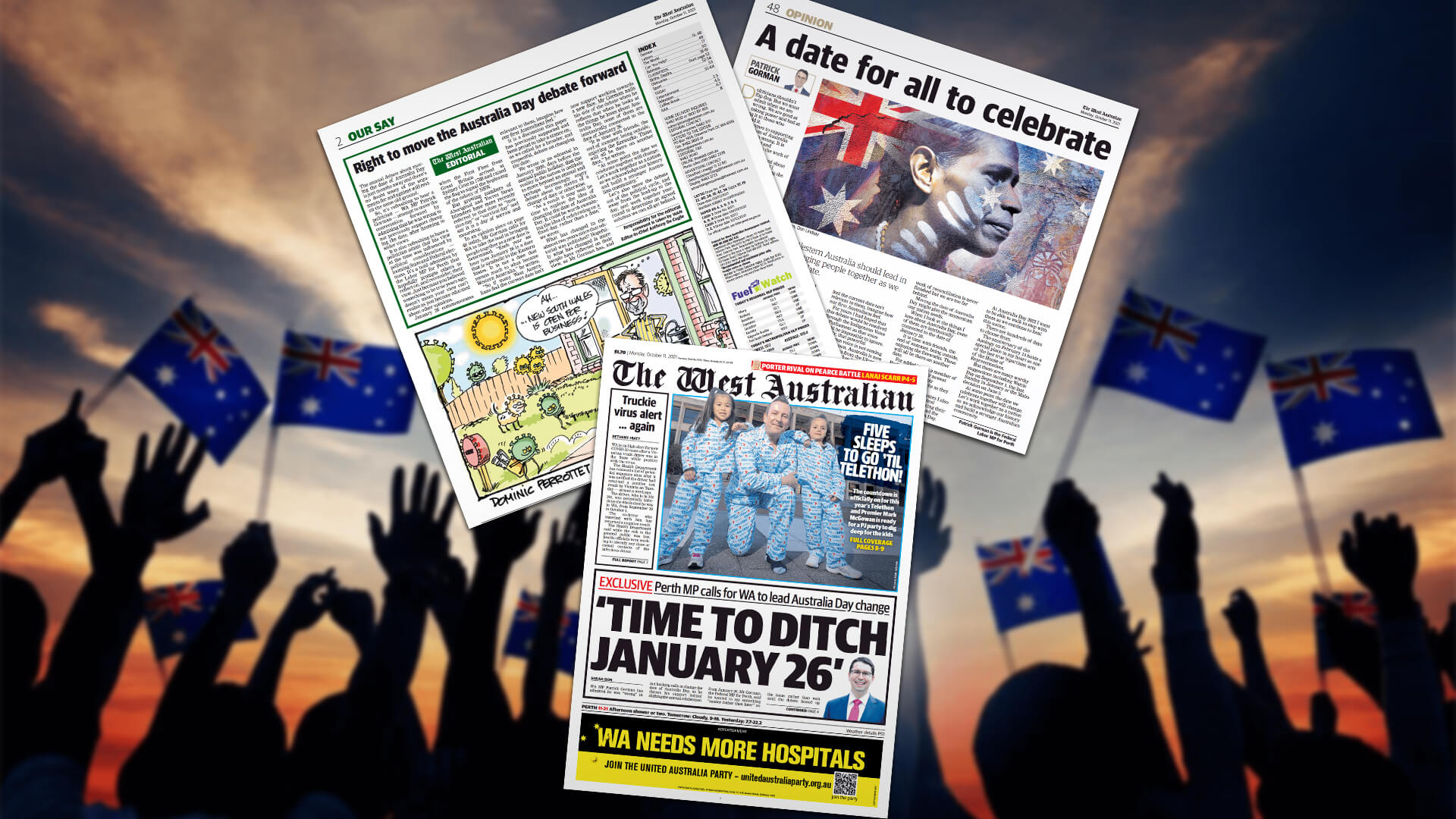 For all those who are lucky enough to live in a state that isn’t run by Premier Mark MaoGowan (AKA “State Daddy”, as his staffers call him), it's worth keeping up to date with WA Labor’s insanity.

The MP is Patrick Gorman, the federal Labor member for Perth and former adviser to Kevin ’07, who shamed himself for being “wrong in not backing calls to change the date of Australian Day” during his years in the public eye.

Gorman said, “I was frustrated with the Government giving up on the Voice to Parliament, as I thought that would have been the path through which the national debate (on the date) was solved”.

“I asked myself why couldn’t the Liberal and National politicians see this was a nation-building moment that they were missing?” he said.

“When I look at the things I love about Australia Day, none of them are intrinsically connected to the date of January 26. It is time with friends, the end of summer, being outside, enjoying the fireworks. These will all be there on another date.

“Let’s work together as a nation as we acknowledge our history and build a stronger Australian community.”

The West Australian’s editorial essentially copy and pasted Gorman’s lament as an endorsement.

Below are the questions Advance and our 150,000+ supporters have for Gorman and the journalists at The West Australian.

1. Doesn’t Gorman’s demand we “ditch January 26” as Australia Day contradict Anthony Albanese’s declaration the date shouldn’t be changed? Or is this an indication of what’s really going on behind the scenes in the Labor Party? Given Gillard backtracked on her promise to not impose a carbon tax on Australia after winning an election, surely we can expect the same from each-way Albo on the Australia Day issue.

2. Why can’t Gorman understand that Aboriginal Australians already have a “voice in Parliament”? They have a Minister for Indigenous Affairs in Ken Wyatt. Labor has Linda Burney. Jacinta Price will hopefully soon enter Parliament to represent the Northern Territory. In fact, Aboriginals have been represented in Parliament since the days of Neville Bonner who first sat in the Senate in 1971.

3. Does Gorman understand how arrogant his assertion that a Voice in Parliament “would have been the path through which the national debate (on the date) was solved”? The debate won’t be “solved” by you getting your own way, mate. Have you ever considered the fact that two-thirds of Australians don’t want the date changed? Shouldn’t the debate include all Australians, whether from an Anglo-Celtic, Aboriginal or Asian background? Why not propose a referendum? Short answer is Gorman is smart enough to know his side would lose.

4. What is nation-building about changing the date of a public holiday dedicated to celebrating the history of our nation? Gorman, perhaps you should do some reading into Labor party legend, former Prime Minister Ben Chifley who understood what a nation-building project is (i.e. not some symbolic change to appease the perpetually offended, but the construction of the Snowy Mountains Scheme which consisted of sixteen major dams and seven power stations – a project so large the water storage created between 1950-1960 had a larger capacity than the combined total of all dams built in the previous century).

5. How dare you lecture us on “acknowledging our history” when you never acknowledge the humanity of Governor Arthur Phillip – the man who colonised Australia on the 26th of January 1788.

6. Where’s your acknowledgment that the Governor made very clear “the laws of this country [England] will, of course, be introduced in [New] South Wales, and there is one that I would wish to take place from the moment his Majesty’s forces take possession of the country: That there can be no slavery in a free land, and consequently no slaves”?

7. Where do you talk about how Governor Phillip established New South Wales as a settlement without slavery while the merchant fleets of Liverpool were transporting slaves to the Americas, Britain’s Caribbean colonies were dependent on slave labour, and slavery was rife in the Raj?

8. Why don’t you mention how Phillip was ordered by King George III to “endeavour, by every possible means, to open an intercourse with the natives, and to conciliate their affections, enjoining all subjects to live in amity and kindness with them”.

9. How about Governor Phillip’s announcement that “any Man who takes the life of a Native, will be put on his Trial the same as if he had kill’d one of the Garrison”. Or of course, the famous story of how Phillip refused to retaliate after an Aboriginal warrior speared him through the shoulder on Manly Cove in September 1790?

As Advance wrote last Australia Day, Australia is not a country founded on racist colonial oppression, but one founded upon Christian morality, equality in the eyes of the law, and the primacy of inalienable rights.

Our nation is now comprised of over 300 ancestries simply because our values made this nation such an attractive place to live.

It’s time the far-left leaves those Aussies who want to celebrate our history and culture on Australia Day alone.