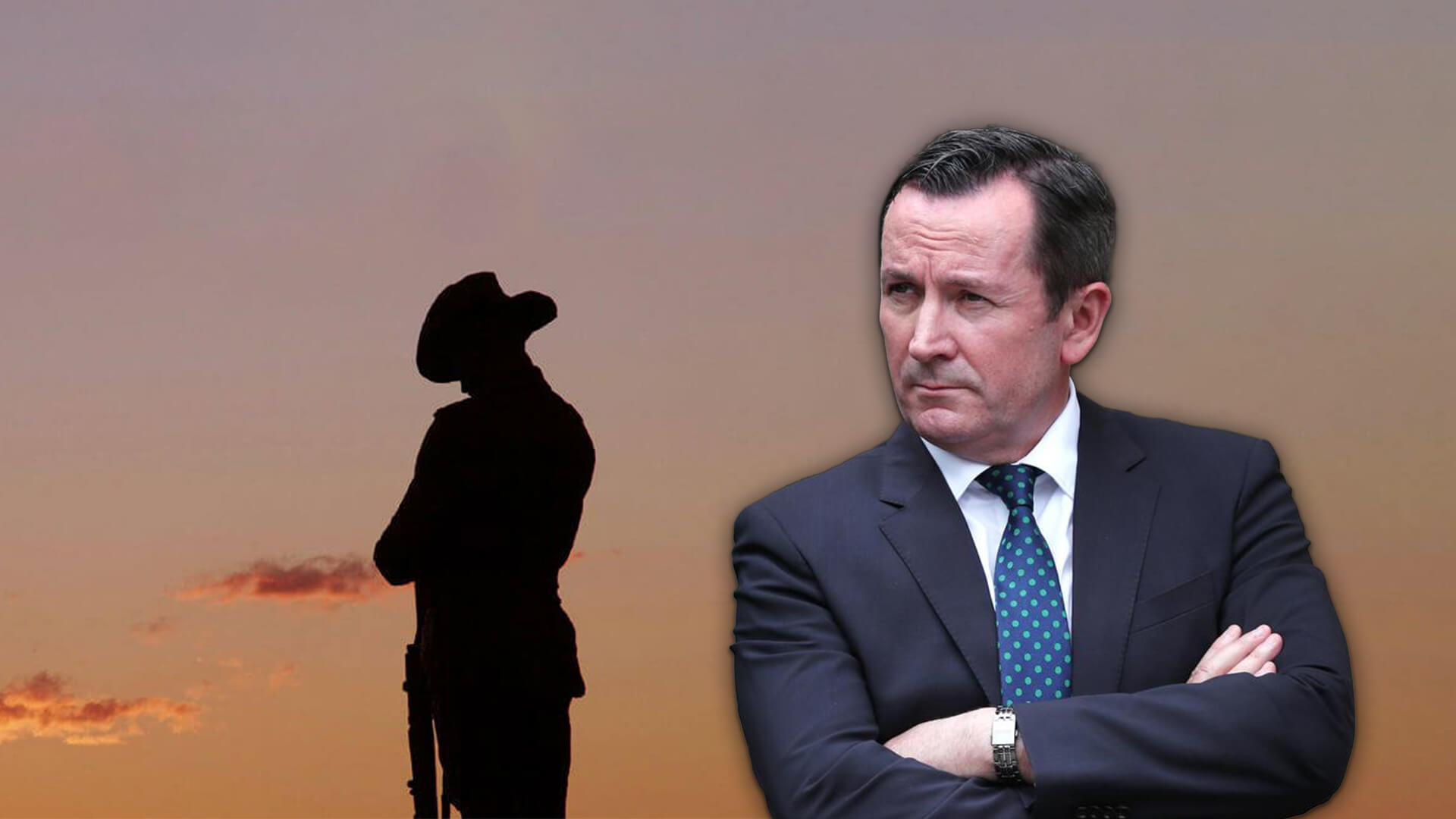 WA Premier Mark Maogowan could be the most un-Australian politician in Australian history.

As reported by 6PR radio in Perth, the McGowan government has declared “the pandemic will again limit the traditional Anzac Day dawn service at Kings Park, which is set to be an invitation-only event this year…”

RSL WA chief executive John McCourt said the service would be by invitation-only at this stage, capped at 500, but there was room for this to change. “There is a danger that if you don’t get back to normal, you lose the power of the tradition,” McCourt told breakfast listeners.

Only 500 people can pay homage to our fallen veterans and yet 30,000 punters can go see an AFL game at Perth’s Optus Stadium?

This is an ABSOLUTE disgrace, mate. You should be ASHAMED of yourself.

ANZAC Day is an Aussie TRADITION.

It’s a time when we give thanks and pay respect to the young men who gave their lives for this country.

All your government seems interested in is giving West Australians bread and circuses to DISTRACT them from your GROSS incompetence and clear HATRED for Aussie traditions and history.

We know you’re probably too busy worrying about mask and vaccine mandates to open up a history book and understand the PROFOUND sacrifices that were made to protect our freedoms, so below are the lyrics to “The Band Played Waltzing Matilda” as sung by Aussie hero and patriot John Williamson.

Listen, learn and show some respect, MaoGowan. There should be NO restrictions on ANZAC day: https://www.youtube.com/watch?v=FA8RbLuRmRs

“When I was a young man, I carried a pack,

I lived the free life of a rover,

From the Murray's green basin to the dusty outback,

I waltzed my Matilda all over.

There’s no time for roving, there's work to be done’,

And they sent me away to the war.

As our ship pulled away from the quay,

And amidst all the cheers, the flag-waving and tears,

We set off for Gallipoli.

How well I remember that terrible day,

When our blood stained the sand and the water,

And how in that hell that they called Suvla Bay,

He showered us with bullets and he rained us with shells,

And in five minutes flat, well he blew us to hell,

He nearly blew us right back to Australia.

… But the band played Waltzing Matilda,

As we stopped to bury our slain,

We buried ours, and the Turks buried theirs,

Then we started all over again.

So those who were left, just tried to survive,

In a mad world of blood, death and fire,

And for ten weary weeks, I kept myself alive,

As the corpses piled higher.

Then a big Turkish shell knocked me arse over head,

And when I woke up in the hospital bed,

I saw what it had done, and I wished I was dead,

Then I knew there were worse things than dying.

All through the green bush far and free,

Cause to hunt and tent peg, a man needs both legs,

No more Waltzing Matilda for me.

They collected the crippled, the wounded, the maimed,

Shipped us all back to Australia,

The legless, the armless, the blind and insane,

The brave wounded heroes of Suvla.

And as our ship pulled into Circular Quay,

I looked at the place where my legs used to be,

And I thanked Christ there was nobody waiting for me,

To mourn, and to grieve, and to pity.

As they carried us down the gangway,

But nobody cheered, they just stood and stared,

Then they turned all their faces away.

And now every April, I sit on the porch,

As I watch the parades pass before me,

I see my old comrades, how proudly they march,

Reviving old dreams of past glories.

But the old men march slowly, bones stiff and sore,

And the young people ask, ‘what are they marching for?’,

And I ask myself the same question.

… And the band plays Waltzing Matilda,

As the old men still answer the call,

Soon none of them will march there at all.

Who'll come a-waltzing Matilda with me?

And their ghosts may be heard,

As they march by that billabong,

Who'll come a-waltzing Matilda with me?”