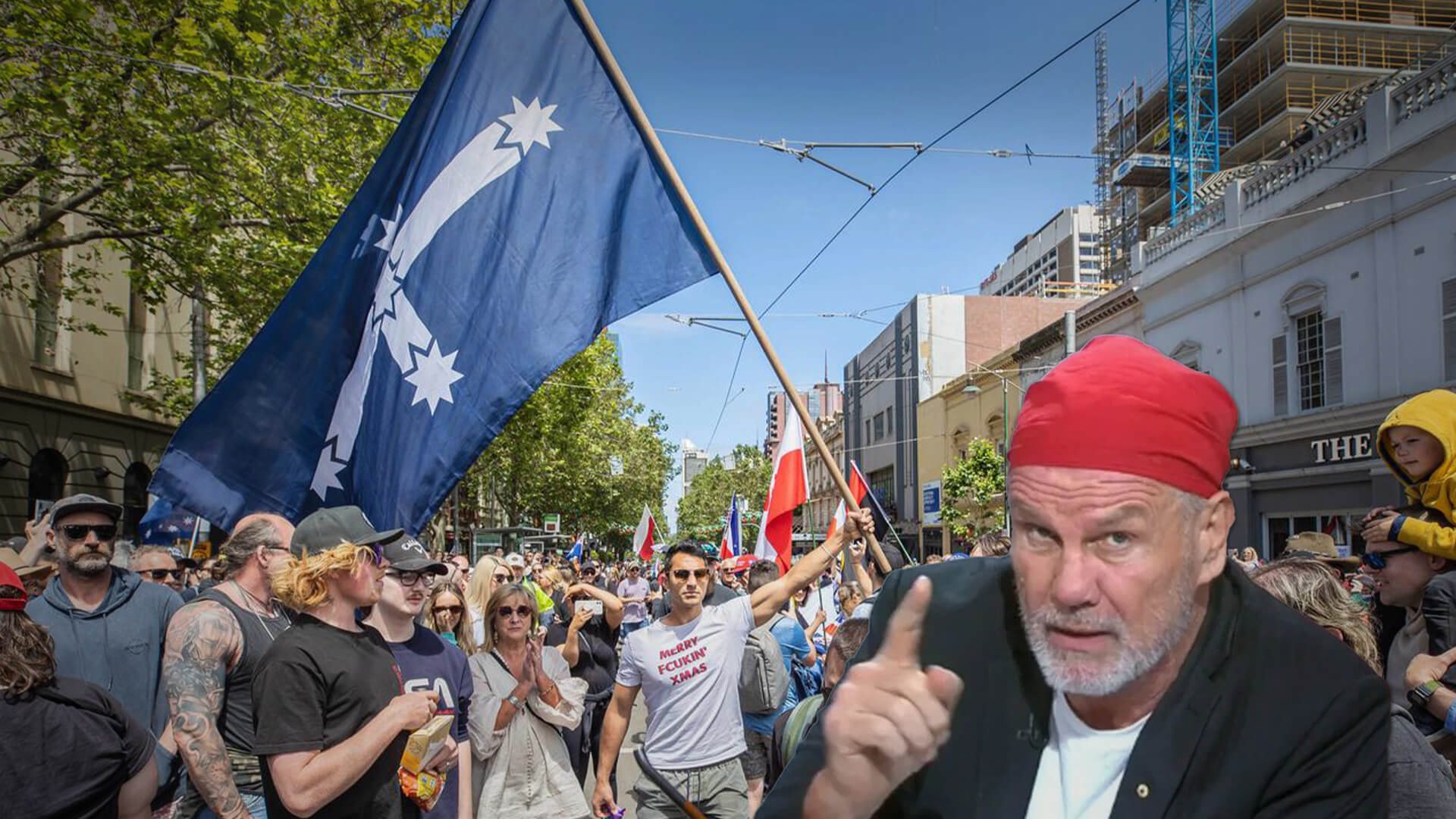 After hundreds of thousands of protestors took to the streets last weekend to stand up against lockdowns, vaccine mandates and government overreach, Pirate Pete couldn’t help but condemn the angry plebs from his Mosman mansion and Tesla sports car.

The Sydney Morning Herald columnist and chair of the Australian Republic Movement said the demonstrators were “low-minded” and “driven by selfishness alone”. He even got his knickers in a twist over the use of the Eureka flag that he appears to claim ownership over.

“As one who wrote a book on Eureka, I say the mighty Eureka flag does not belong in that collection of assorted nutters,” he indignantly proclaimed.

“Eureka was about collective action of high-minded people for the greater good of all.”

Mate, who the hell are you to say who is and isn’t “high-minded” and what is and isn’t for the “greater good of all”.

Let us give you a history lesson on what really happened in 1854 and how it relates to the situation Australians have found themselves in today.

On the first of September 1851, Governor Latrobe proclaimed the Crown reserves the right to all mining proceeds and created a license fee of thirty shillings per month that the miners had to pay.

In November of 1854, they built a stockade and under the leadership of Peter Lalor swore an oath that said: “we swear by the Southern Cross to stand truly by each other and defend our rights and liberties”.

As expected however, news of this rebellion was spreading around and the Governor decided to bring in the military.

So then on Sunday the 3rd of December 1854, when the majority of the miners were at Church, the military attacked.

The battle was short and with many casualties, few on the military side.

Today the legend remains as pure as ever and represents the spirit of mateship and resistance in the face of government overreach – a spirit that has never been stronger given Australians are now fighting back against the cynical lockdown policies imposed on them by governments over the last two years.

For instance, although Pirate Pete would no doubt disagree, the decision of Governor Latrobe to tax the miners and take the fruits of their labour back in 1851 is similar to our state governments shutting borders, locking us down, picking what businesses are/aren’t essential and forcing people to engage in a medical procedure they may not want.

Even more interesting is how elitism drove both British aristocrat Governor Latrobe and Pirate Pete Fitzsimmons.

Governor Latrobe felt entitled to take away the livelihoods of miners who toiled on the riverbank to finance the development of his own colony; just as Pirate Pete thinks it’s okay to force people to get vaccinated and segregate them from society if they refuse to comply with what he believes in.

Although it's hardly surprising to see Pete make a fool of himself, there’s a reason elites have been rocked by the recent protests.

They understand the protests are made up of Australians from all walks of life who are sick of being lectured to by politicians, bureaucrats, experts and billionaire activists about what is and isn’t best for them and their families.

They know millions of Australians don’t trust their hysteria about new variants, the coming climate catastrophe and the need to deindustrialise this great land to somehow save the planet.

More importantly, the elites are beginning to see that the Australian people are not as apathetic and compliant as they hoped.

As ADVANCE has been saying for a while now, Australia needs a Eureka moment, and the more polls we see and the more people we talk too, the more we suspect that moment will come at the next federal election.

Bring it on Australia…