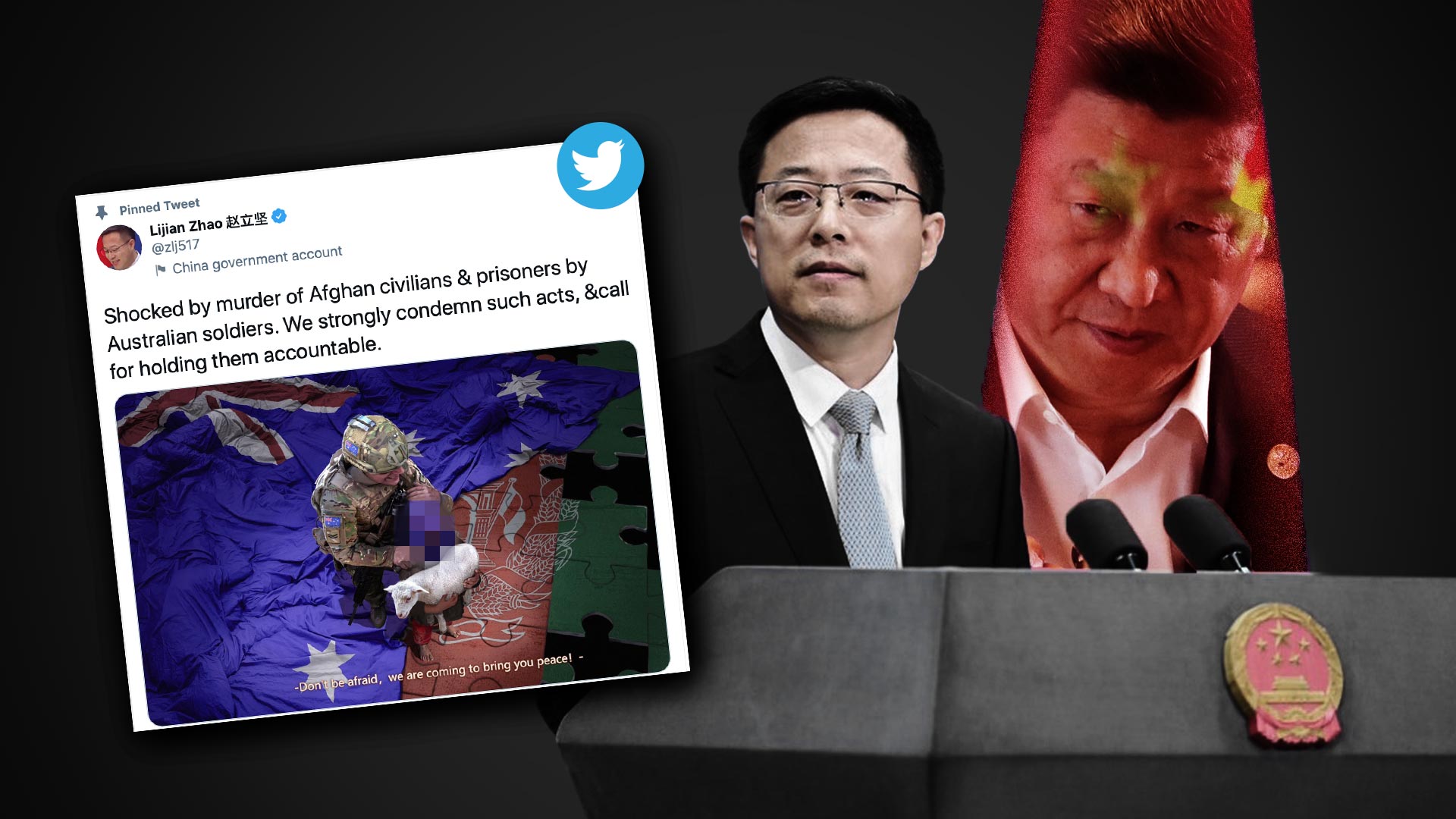 The Chinese Communist Party’s Foreign Ministry Spokesman’s posting of a fake and foul tweet is a reckless act of aggression.

There’s no other way to describe it.

The fake image is of an Australian soldier with a knife to the throat of a little Afghan girl.

It is clearly designed to incite Islamist terrorists to attack and kill Australian citizens.

Unlike the CCP, which murders its own citizens, puts Uighurs in concentrations camps, harvests the organs of Falun Gong practitioners and jails people without cause, Australia investigates and punishes those who commit human rights atrocities.

Because we are a decent people, we are putting our nation through the trauma of investigating serious allegations made against a small number of our soldiers.

Because we have a moral compass, we are capable of such introspection, despite the pain we know it will cause.

For Lijian Zhao to tweet his despicable photoshopped image when he serves an unaccountable regime which routinely kills people and abuses their human rights is hypocritical in the extreme. We are not about to take lessons from you sir. Who the hell do you think you are? The CCP has been waging unrestricted war against us for decades now, and we didn’t even know it. Cyberattacks, faux trade disputes, interference in our democratic institutions, stealing of intellectual property and now the CCP virus it deliberately let loose around the globe. Its time for all of us to wake up to the threat the CCP poses to all free people.

And like clockwork, the Greens, who have more in common with the CCP than to our own national values, former Greens Senator Scott Ludlam

tweeted “Morrison seems genuinely angrier about the meme than he was about the evidence of australian soldiers executing dozens of people.”

The Greens think a doctored image of an Australian soldier with a knife to the throat of a little girl is a “meme”.

But because they are of the Left, Ludlam will be given a leave pass by the mainstream media and probably made a hero by the ABC.

Knowing the image is fake, the CCP (and Twitter’s Jack Dorsey) have left the post up. They have no shame – they want to rub Australia’s nose in it.

That’s because for them, we are their enemy and any tactic is justified for a regime that has no moral compass.

Advance has been warning that the CCP is an existential threat to our nation for the past two years. We have shone a light, literally, on the naivety of our universities allowing the CCP to embed itself on campus through Confucius Institutes. We have joined calls for the Government to break the lease held by a CCP-controlled company, Landbridge, on the strategically critical Port of Darwin.

It’s time to acknowledge that the CCP are not our friends.

Some of China’s diplomats should be sent packing.

Instead of transitioning to flimsy and expensive energy sources while the CCP builds coal-fired power stations like there is no tomorrow, we should be transitioning our export markets away from the CCP to other countries.

We need to wake up to the fact that the CCP and their globalist friends in the climate crazy World Economic Forum and the UN, have us focussed on polices that make us weak while the CCP focuses on what makes it strong.