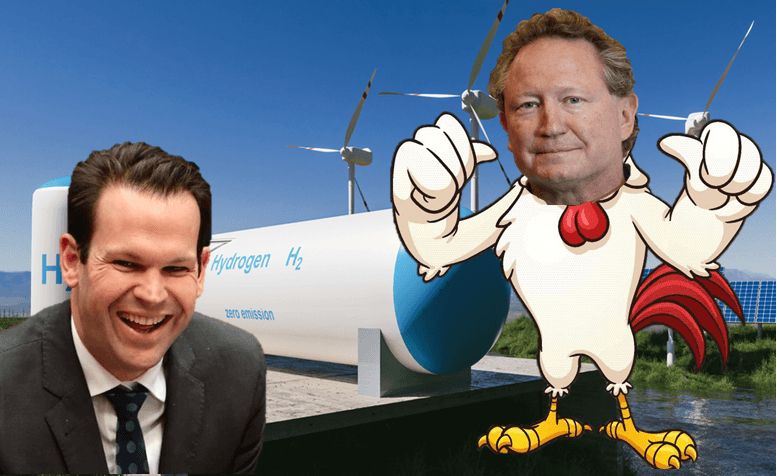 Twiggy Forrest has a very good PR team who over-engineer his speeches as much as his pie-in-the-sky green hydrogen steel dreams.

In a speech to the Press Club yesterday, Twiggy called on the Morrison government to commit to net-zero emissions; he called Senator Matt Canavan a “hysterical Chicken Little politician”; and he pretended to care about the future of Australians after allowing the Chinese Communist Party to dominate the world steel industry with his iron ore exports.

In red below are selected quotes from Twiggy’s hour long speech to the Press Club. In black are Advance’s responses.

“Fossil fuels are like the Berlin Wall; they finally and quite suddenly collapsed. The change is now and it's sudden. The only question is: will Australia be part of it in time to be competitive?”

The proportion of fossil fuel-based energy used worldwide only decreased from 80.3 per cent to 80.2 per cent between 2009 and 2019, despite trillions in subsidies for renewables.

Only 25 per cent of the 61 exajoule increase in global energy production between 2009 and 2019 came from renewables.

And the price of thermal and coking coal, oil and natural gas are currently at record highs because Europe’s solar panels and wind turbines have failed to keep the lights on amidst shutdowns of dozens of coal-fired power plants and nuclear reactors.

“Only this morning, the Reserve Bank Deputy Governor said, no matter the opinion of critics, the move to net-zero is going to happen, and if they don’t, the risk to local businesses will only continue to grow.”

Look at your buddies over in China who this week announced they'll build more coal-fired power plants and has hinted that it will rethink its timetable to slash emissions.

“Given the predominant place of coal in the country’s energy and resource endowment, it is important to optimise the layout for the coal production capacity, build advanced coal-fired power plants as appropriate – in line with development needs – and continue to phase out outdated coal plants in an orderly fashion. Domestic oil and gas exploration will be intensified,” a statement from Xi Jinping read.

The same thing is happening in France.

Although Macron also said he will back green hydrogen, unlike you, he is also backing the installation of new small modular nuclear reactors – a proven technology that has been used since America’s first nuclear submarine, the USS Nautilus, sailed out of Connecticut in 1954.

President Vladimir Putin’s government is spending more than $10 billion on railroad upgrades that will help boost exports of coal, as he believes the demand for coal will continue to rise as countries wake up to the fact that weather-dependent renewable energy can’t underwrite an industrial economy.

“We can be a green hydrogen manufacturing superpower.”

This is exactly what we were told by Rudd and Gillard a decade ago. Australia can be a “renewable manufacturing superpower with our abundance of wind and solar resources”.

Now you expect us to believe you on green hydrogen – another unproven, pie-in-the-sky green pipe dream?

“80 per cent of West Australians agree with net-zero emissions”.

According to who? And how much are they willing to pay for it, mate?

A poll conducted by Newscorp the other day, found about 87 per cent of Australians would refuse to pay any more than $50 per month so the nation reaches carbon neutrality.

Given the world’s only independent estimate of net-zero cost from New Zealand found a net-zero target in 2050 will cost at least 16 per cent of GDP every year, we can do the numbers to find how unpopular net-zero emissions really will be.

Dividing this figure by the Australian population, you get $8,290 per person per year or $691 per month in GDP terms – 14 times more than the $50 per month 87 per cent of Australians would be willing to pay to reach net-zero emissions.

“It’s taken 50 years for fossil fuels to get the power bills down, and mate, they’re still going up”.

Queensland had the cheapest power in the world under the Bjelke -Peterson government.

Because Sir Leo Hielscher, as well as to the late Ron Camm and the late Joh Bjelke-Petersen, negotiated that if you wanted to mine coal in Queensland then you gave one per cent to us. It was called the reserve resource policy.

If only someone had the brains follow Petersen’s lead with Australia’s gas industry, given we now see $36 billion coming into the Australian economy and boomeranging straight out again, because the collective wisdom and brains of Canberra sold it for 6c a unit; and yet we Australians now have to buy it back at $16 a unit.

Are you still going to tell us fossil fuels are responsible for our higher power bills? Or is it the entrance of renewables into the grid and the incompetence of both the Labor and Liberal parties over the last four decades?

“Ladies and Gentlemen, welcome to the future. What you're seeing here is economic and energy independent sovereignty being brought right back to Australia. Our green hydrogen, our green ammonia, and our green fertilizers will not be determined by what Saudi Arabia or Russia, in a good mood or not, might causally conclude what the price might be, which impacts the lifestyle of every Australian. Let's bring our sovereignty home…Please think of that when you see a hysterical Chicken Little politician on Karl and Ali’s Today Show clucking about energy security and doing absolutely nothing about it”

Twiggy, how dare you imply Senator Matt Canavan is a “Chicken Little politician” – especially given you’re the one who literally thinks the sky is falling because of coal.

You’re right, Australia doesn’t need to be held to ransom by the Saudis and the Russians.

We have oil. We have coal. We have uranium. We have thorium. We have natural gas. It’s that we choose to not get it out of the ground, refine it and prioritise its supply to Aussie industry. This is what Senator Canavan has been saying for years.

Your unproven green hydrogen technology should not be ‘the horse we back’ in a time like this, given its ten plus years away from being anywhere cheap enough for competitive industrial use; after billions in taxpayer subsidies, no doubt.

“If we miss declaring carbon neutrality at COP26, we'll eventually be forced to make it anyway. Just as the reserve bank observed today. But by then, our markets and our financings will dry up.

Okay Twiggy, so how about you stop selling your millions of tonnes of iron ore to the Chinese Communist Party, which has just committed to building more coal-fired power plants so the impoverished people of Manchuria don’t freeze to death over Christmas?

What a joke this is.

We call on Twiggy to debate Professor Ian Plimer on the topic of “green hydrogen” so we can finally get some answers as to how the new technology can be competitive, given:"If you were to make hydrogen, you’ll lose a huge amount of energy doing it,” the professor said.

That requires a huge amount of energy.

And then you’ve got to transport this hydrogen in a truck or a pipeline, and that is a mobile bomb.

That hydrogen will leak out through the steel in pipelines or in a truck, just the same as it leaks out from the earth.

That hydrogen weakens the steel and so what have you got?

You have got a bomb waiting to go off.