In a clear case of ideology over biology, a transgender person who was born a man has won gold in a women’s cycling event at the UCI Masters track championships in Los Angeles.

Dr Rachel McKinnon, a Canadian philosophy professor at South Carolina’s College of Charleston, took to social media to celebrate her world championship win in the women’s 35-44 sprint final at the Velo Sports Center in Los Angeles earlier this week...

"An image of McKinnon standing tall above her competitors during the medal presentation ceremony has spread globally in the wake of her controversial victory — just as she predicted.

McKinnon, born a biological male, won gold in the sprint final against friend Caroline Van Herrikhuyzen from the Netherlands.

An elated McKinnon claimed, to her knowledge, she is the first openly transgender athlete to win a world championship in any sport, after nudging past Van Herrikhuyzen on the final straight in a time of 12.903 seconds.

American Jennifer Wagner, who finished third, led the criticism against McKinnon’s participation in the championships.

When English media commentator Katie Hopkins’ took an online swipe at McKinnon, third placegetter Wagner declared it was not fair that McKinnon was able to compete at all. Hopkins also declared it was “febrile madness” for the UCI to sanction McKinnon’s participation.”

There’s been plenty of debate about the future of women’s sport in the wake of this controversy.

Here’s the picture of the winners podium – what do you think? 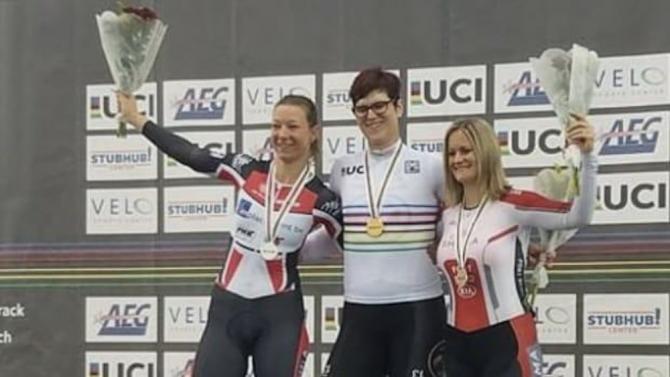 Advance Australia believes this is just the latest example of what happens when gender politics trumps biological reality and common sense. After all, the reason men and women compete separately in sport and athletics is because the biological reality is that male and female bodies are built and function differently.