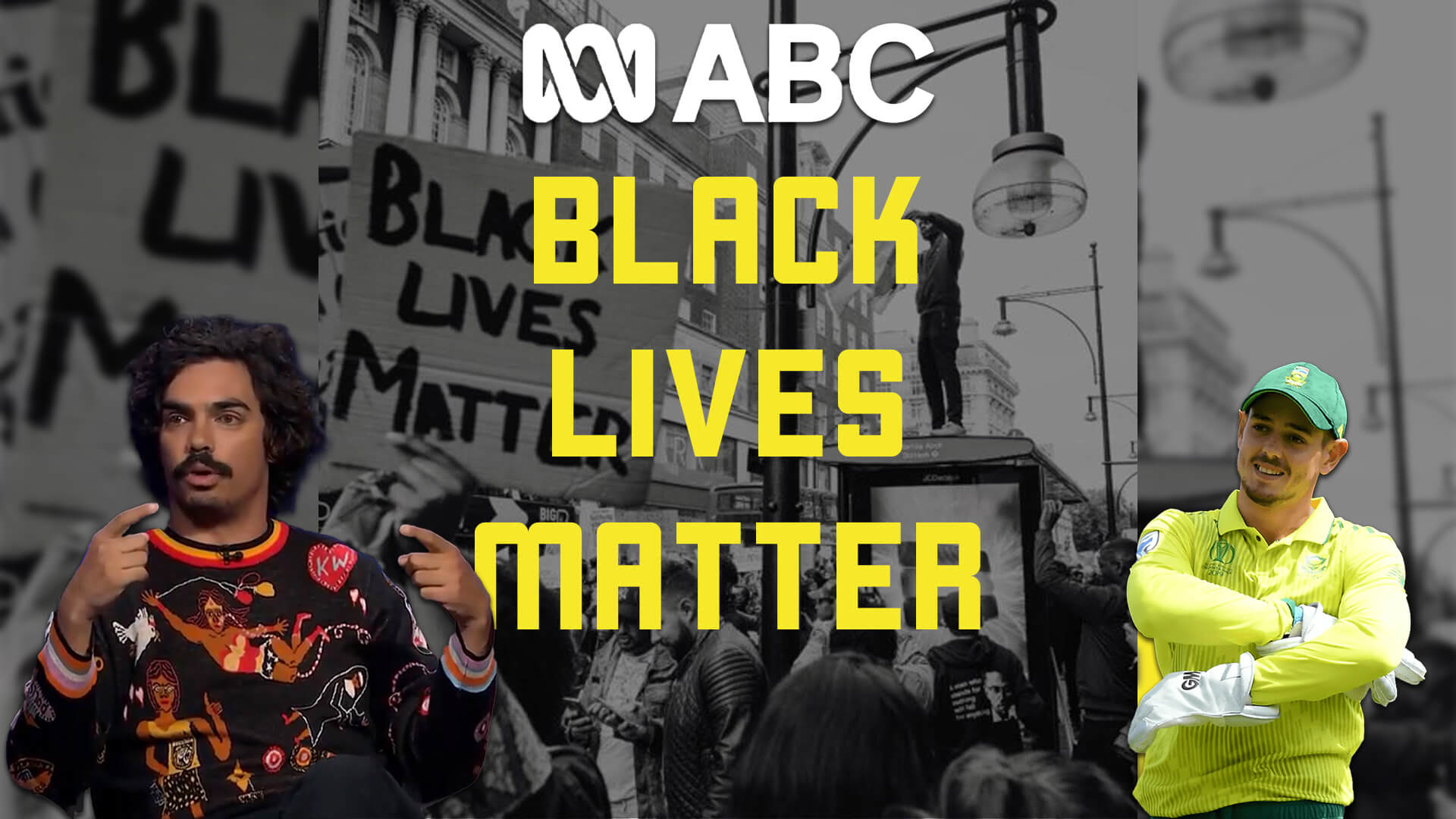 The ABC is getting more pathetic by the day.

After South African cricketer Quinton de Kock refused to take a knee for Marxist movement Black Lives Matter before a recent match, the Ultimo-bound journalists of our taxpayer-funded national broadcaster were shaking with rage.

Speaking on ABC Breakfast, chronic whinger and member of the perpetually offended, Tony Armstrong, said it was “confounding” de Kock would take such drastic action to avoid taking a knee, particularly considering South Africa’s chequered past with racism.

We’ve seen sporting teams right around the world start to get behind this movement,” he said on Wednesday morning.

So for him to not do that, all that I think — and this is my own personal opinion — the question has been bubbling in my mind is how racist do you have to be, to not just take a knee and do that in conjunction with your teammates to show support, to even pretend to show support? You’ve got to be pretty strong on your conviction not to.

At the very best it is confounding, confusing and puzzling.

Speak for yourself, buddy!

Advance and our 150,000+ supporters and 83 per cent of news.com.au readers totally support de Kock’s brave decision to not bow to Marxism, division and hatred.

As a South African, de Kock obviously understands that when one scratches below the surface of the Black Lives Matter movement, it becomes manifestly clear BLM is only about protecting black people they deem useful to their agenda.

On the one hand, BLM co-founder Patrisse “I’m a trained Marxist” Cullors laments rising global racial inequality, and yet, on the other hand, asserts we must “build a better world for all black lives and protect our communities from the impact of climate change”.

What Cullors doesn’t understand is that action on climate change is responsible for the deaths of hundreds of thousands of Africans every year.

A study released by the CO2 Coalition’s 60 climate scientists and energy engineers reveals how Obama-era policies that favour so-called green energy over coal-fired electricity are dooming millions of Africans to lives of extreme poverty, environmental degradation and increased risk of early death.

As Advance has been saying for years, economic development requires reliable, affordable electricity for use by industry, businesses and households – and taxpayer-subsidised intermittent renewables just aren’t up to the job.

However, the globalist elites at the World Bank don’t want cheap power for the millions of impoverished Africans.

They care more about climate change than the health and prosperity of these desperate people.

A perfect example is how the World Bank has banned lending to countries wanting to maintain or build new coal-fired power plants.

Sounds a bit like ANZ’s ban on lending to coal power, farmers and mines doesn’t it?

Instead, they lend to countries to assist them in closing mines and replacing the existing power plants with unreliable renewables.

According to Akinwumi Adesina, the African Development Bank’s president, “Coal is the past, and renewable energy is the future.”

The ridiculous obsession with renewables and climate change is responsible for the 400,000 yearly African deaths from pneumonia, heart disease, pulmonary disease, stroke and lung cancer.

Well the Africans are forced to cook, heat and illuminate their homes with solid fuels (e.g. wood, charcoal and dried animal dung) because they don’t have access to cheap, reliable power from affordable coal-fired power plants.

Does Greta Thunberg ever wonder why there was no Climate Strike in the streets of Kinshasa, the capital of the Democratic Republic of the Congo?

Well here’s a clue for her.

Cobalt is a key material in the production of renewables. Without it they don’t work. And Congo produces more than 60 per cent of the world’s supply.

With the billions upon billions pouring into the production of renewables, you’d think the Congolese would be cashing it in on the climate bandwagon.

In 2018, The Guardian reported that there were about 255,000 creuserurs (people who dig with their hands in open cut mines), “35,000 of whom are children, some as young as six” in Congolese mines.

They “toil in putrid conditions, endure pitiful wages, grave injury and risk death to mine their cobalt,” The Guardian reported.

How many more African children need to be employed in dangerous mines to meet the targets demanded by rich kids in the affluent West?

How many more Africans will be forced to heat their homes with dried animal dung because their government can’t find finance to construct a new coal-fired power station?

How long until Greta Thunberg and her mates at the UN take a trip to Africa to explain why the Congolese children are stealing her “dreams” and “childhood” by not taking “climate action”.

It’s time these ‘human rights advocates’ grow up and actually do something to reduce poverty in Africa instead of wasting their time virtue-signalling about Western vanity projects.