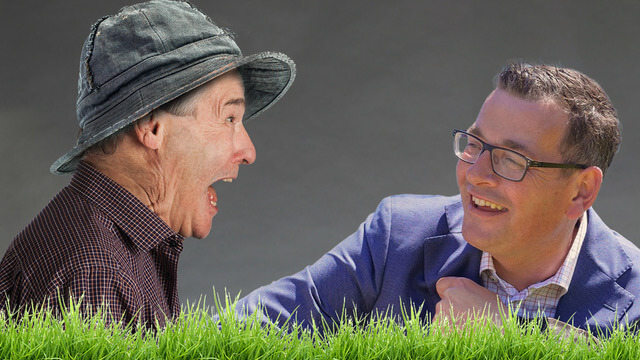 When stage four lockdown was imposed in Victoria, business owners experienced mass confusion about who could still operate.

The new regulations were a fat mess.

Victorian businesses knew that anyone caught breaking the state’s lockdown rules would cop a $4,957 fine…  They just didn’t know exactly what those rules were.

“No one, including many of your Members of Parliament or public servants, understands what is allowed or forbidden,” Jim’s Mowing founder Jim Penman said at the time.

Such was the confusion that when premier Dan Andrews said that cleaners and gardeners were not permitted to work under his new regime, Penman kept his franchises running given the Department of Health and Human Services’ stage 4 guidelines clearly stated that sole operators could continue to work.

The frustrated business man even offered to pay for any fines that may be issued.

Predictably, instead of seeing sense, Andrews doubled down on his view that Jim’s Mowing was not an essential service: “They are not permitted workers,” he said.

But the horse had bolted.

Having received mountains of support for sticking it to the Dan, Penman is now speaking up for the thousands of other Victorian businesses being needlessly levelled:  “This is not just about gardeners. I speak for many including cleaners, pool cleaners, maintenance workers, handy people, fencers, window cleaners, painters, concreters and more.”

The mowing mogual has let rip via an open letter, accusing Andrews of making exemptions for “major corporations” or those with “powerful unions” while preventing sole operators from working:

You have, by changes to stage 4 restrictions, made it illegal for solo business operators to work. Despite this, council workers, government contractors and others are continuing to work in groups on road works, in parks, on nature strips and across other facilities and public spaces.

I have been swamped with pleas from mum and dad business operators across the state, desperate for help because you will not listen.

Why is it that council workers in groups can do jobs, while self-employed people working alone cannot?

Yeah, Andrews – why are Melbourne City Council gardeners “considered essential”?  Why is it only the little guys getting smashed??

The total inconsistency of the state government’s messaging plus the complete and utter nonsensicalness of the ban makes the premier look even more of a fool.

How on earth do gardeners and cleaners pose a risk to public health?  Social distancing measures can easily be adhered to by the industry.

“I would defy the Premier to name one person in Australia, New Zealand or anywhere in the world who has caused or caught an infection while working alone in someone’s garden,” Penman said, calling on Andrews to allow Victorians to operate so long as they are alone on site.

“If you cannot allow such a simple change to breathe life into our failing economy and provide people with the ability to get back to work and put food on their tables, then step aside, and let someone else take over.”

Penman said the state needed a plan to get “mum and dad businesses” back to work “before they lose their homes, their health, their families and their future”:

While you are reading this letter, sole business operators are facing financial ruin, unable to put food on the table for their families, unable to meet the cost of their mortgage, unable to pay for heating, and unable to pay medical bills. They cannot go on. We need urgent action to get them back to work….

You have made other mistakes that cannot be fixed, but this one you can. Please, be prepared to admit it and move on.

Tens of thousands of vulnerable people depend on you to put things right.

Penman is requesting an “urgent meeting” with Andrews.

How we’d love to be a fly on the wall at that powwow.

Of course the premier won’t take such a meeting, especially after such a hiding, but you’ve got to hand it to Penman for speaking up for mainstream Australia.