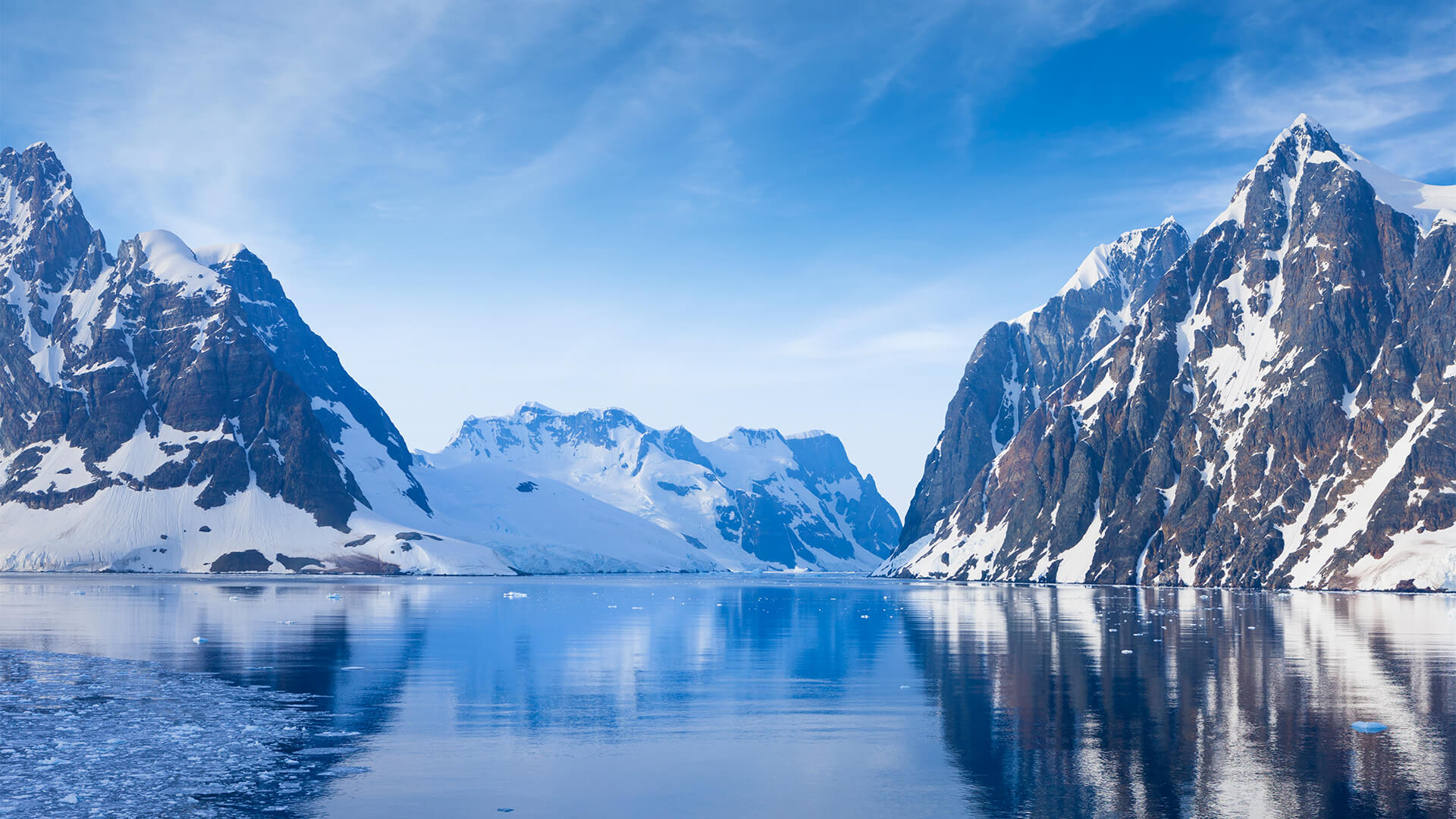 The selectivity of the mainstream media when it comes to global temperature change is remarkable.

The World Economic Forum declared that “these record temperature rises are clear indicators of a warming planet and increase the risks relating to climate change”.

The United Nations and its World Meteorological Organisation concluded that “hundreds of millions of people are at risk from melting ice in the planet’s polar regions, linked to sea-level rise”.

This year, the same alarmists are nowhere to be seen and the reason is clear.

Contradicting predictions of perpetual global warming, rising sea levels and “climate catastrophe”, the South Pole has recorded its coldest winter since 1957, with the average temperature at the Amundsen–Scott South Pole Station between April and September, a bone chilling minus -78 degrees Celsius. 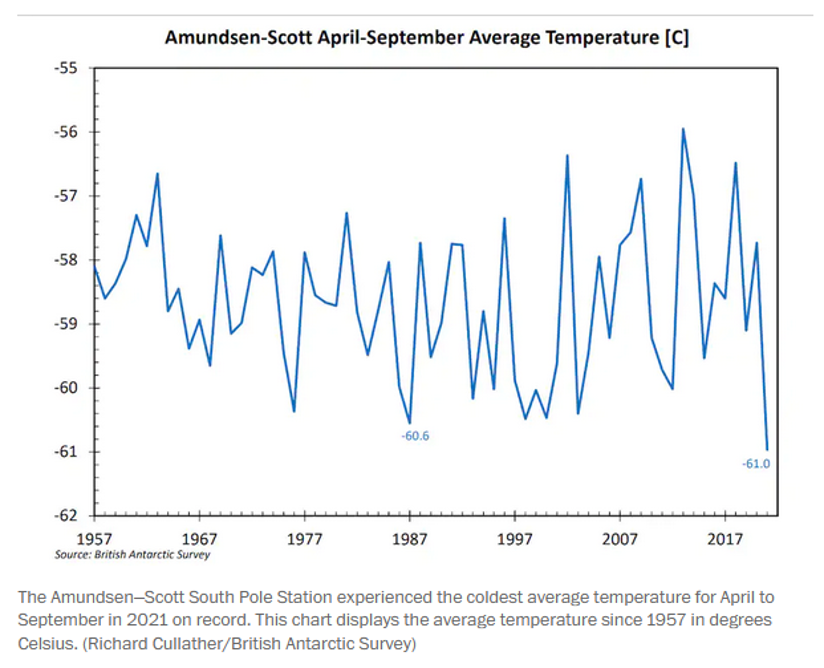 As a result, sea ice levels surrounding the continent rose to their fifth-highest level on record in August, according to the National Snow and Ice Data Centre.

Even today, the temperature at the South Pole Station is -63 degrees Celsius, an incredibly low reading for early October given the southern hemisphere has just left the austral winter that normally sees average monthly temperatures of around -60 degrees Celsius.

Are the climate models wrong?

Are the colder temperatures a symptom of a changing climate that can be pinned on humans?

Or could it be that many experts don’t have the same opinion on changing temperatures and climate change as the alarmists at the United Nations and CSIRO do?

In a paper titled “The Medieval Climate Anomaly in Antarctica” (2019), Luening, Galka and Vahrenholt concluded “temperatures, precipitation and weather extremes across the globe are characterised by systematic variability that is, to a large extent, driven by multidecadal and shorter-term ocean cycles.

“Other factors that may have affected pre-industrial climate change are solar activity changes and volcanic eruptions.”

Below are several graphs showing their results: 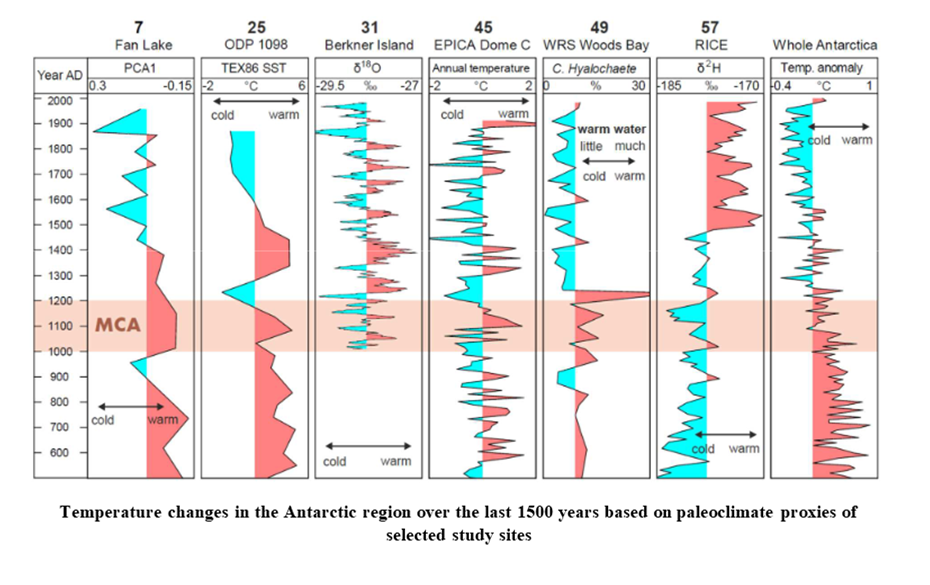 Their findings were unsurprising to much of the scientific community.

In the abstract of a paper titled “Antarctic climate variability on regional and continental scales over the last 2000 years” (2017), the 18 scientists wrote, “climate trends in the Antarctic region remain poorly characterised, owing to the brevity and scarcity of direct climate observations and the large magnitude of in-terannual to decadal-scale climate variability”.

The paper concluded that “based on the extended database, corroborate previously published findings for Antarctica from the PAGES 2k Consortium (2013): temperatures over the Antarctic continent show an overall cooling trend during the period from 0 to 1900 CE, which appears strongest in West Antarctica, and no continent-scale warming of Antarctic temperature is evident in the last century.”

Below are several graphs showing their results: 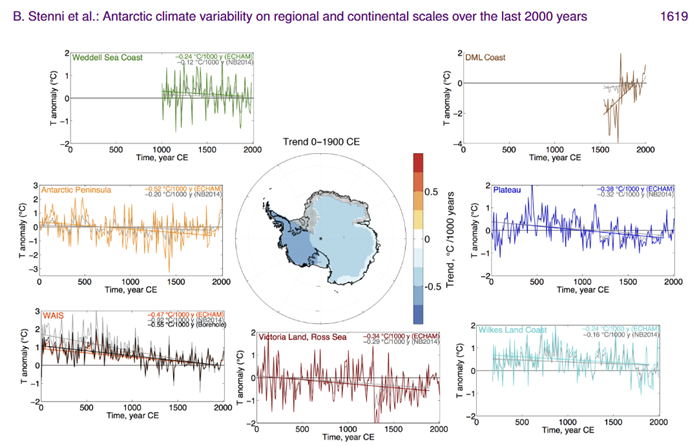 Surprise, surprise – exactly what Advance has been trying to explain for several years now.

The science is not settled on what is causing climatic change and whether there is a human-induced linear upward trend in sea-levels and temperatures.

There is no evidence that if Australia, which produces 1.3 per cent of the world’s emissions, were to go net zero that temperatures would change. As Chief Scientists Alan Finkel explained, “the impact would be virtually nothing”.

More importantly: such a lack of evidence should undermine any calls for Australian industry to rapidly transition to forms of energy generation that depend on the weather.

We can’t afford to end up like Europe and China in the winter.