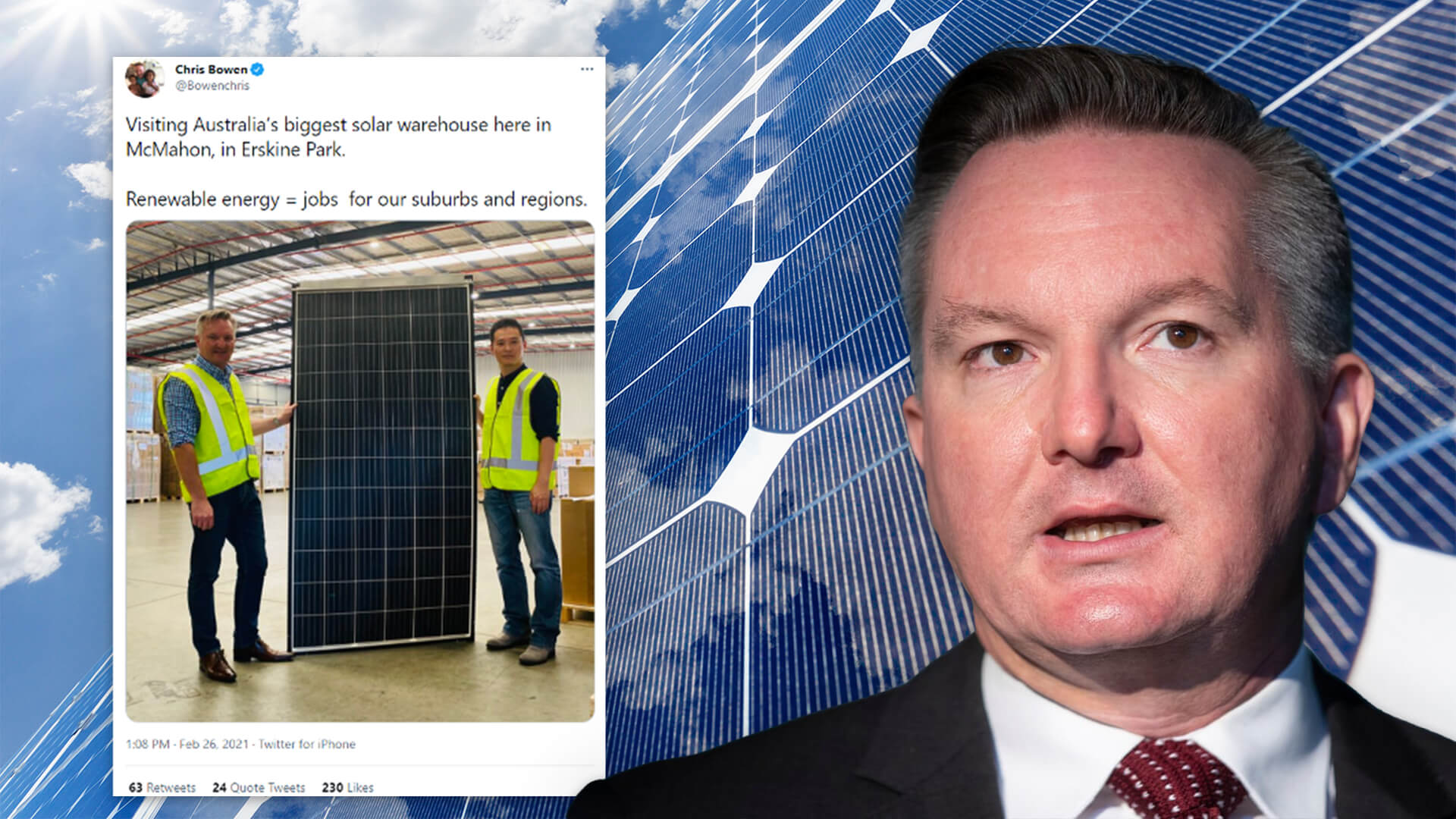 Shadow Minister for Climate Change and Energy Chris Bowen has proven he represents everything wrong with Australian politics.

Last week Bowen posted on his Twitter account celebrating how he visited “Australia’s biggest solar warehouse” in his McMahon electorate.

Attempting to downplay concerns about how for every subsidised green job created 2.2 jobs are lost, Bowen tweeted that “renewable energy = jobs for our suburbs and regions.”

Renewable energy = jobs for our suburbs and regions. pic.twitter.com/XWJ9is9wWk

Advance wonders if you even bothered to ask the CEO of the “One Stop Warehouse” you visited, Anson Zhang, where he sources the solar panels he flogs to Australian consumers and businesses.

It’s so obvious Mr Bowen, that on the “One Stop Warehouse” website, anyone can see that the twelve solar panel companies Zhang distributes for are all foreign owned.

In fact, the majority of the companies manufacture their solar panels in China, including:

This is exactly what Advance has been saying for years now.

Politicians like Bowen don’t care for the interests of Australian workers.

Instead, he’d rather turn up for photoshoots to spruik inefficient, taxpayer-subsidised, foreign-made products designed almost exclusively to reduce carbon emissions, ignoring the importance of energy affordability and security.

Mr Bowen, how will these solar panels reduce emissions when approximately 90% of Australia’s solar panels are made in Chinese factories powered by coal-fired power plants using thermal coal derived from the Port of Newcastle?

Perhaps this is why the UN has allowed China, by far the world’s largest emitter, to increase its emissions until 2030, while countries like Australia are forced to go net zero to stop climate Armageddon.

Mr Bowen, how can you say to your constituents that renewables “equal jobs for our suburbs and regions” when the Chinese-made panels only require warehousing, distribution, installation and maintenance.

This process is nowhere near as job-intensive and economically productive as the jobs required in the construction, operation and maintenance of coal-fired, gas-fired and nuclear power plants.

Mr Bowen, did you even consider that renewables increase power prices to the point whereby a high-wage economy like Australia can no longer remain competitive in manufacturing and energy-intensive industry – resulting in the loss of hundreds of thousands of jobs and our capacity to be self-sufficient and truly sovereign as nation?

Mr Bowen, you are the problem.

As the saying goes, propaganda is not what you say, it’s what you choose not to say.

Although you may try and argue Labor would strive to create an Australian solar panel manufacturing industry if elected, Advance’s near 100,000 supporters know this is another green-left pipedream.

Perhaps then your voters would finally realise the only real path to zero emissions is nuclear or clean coal.