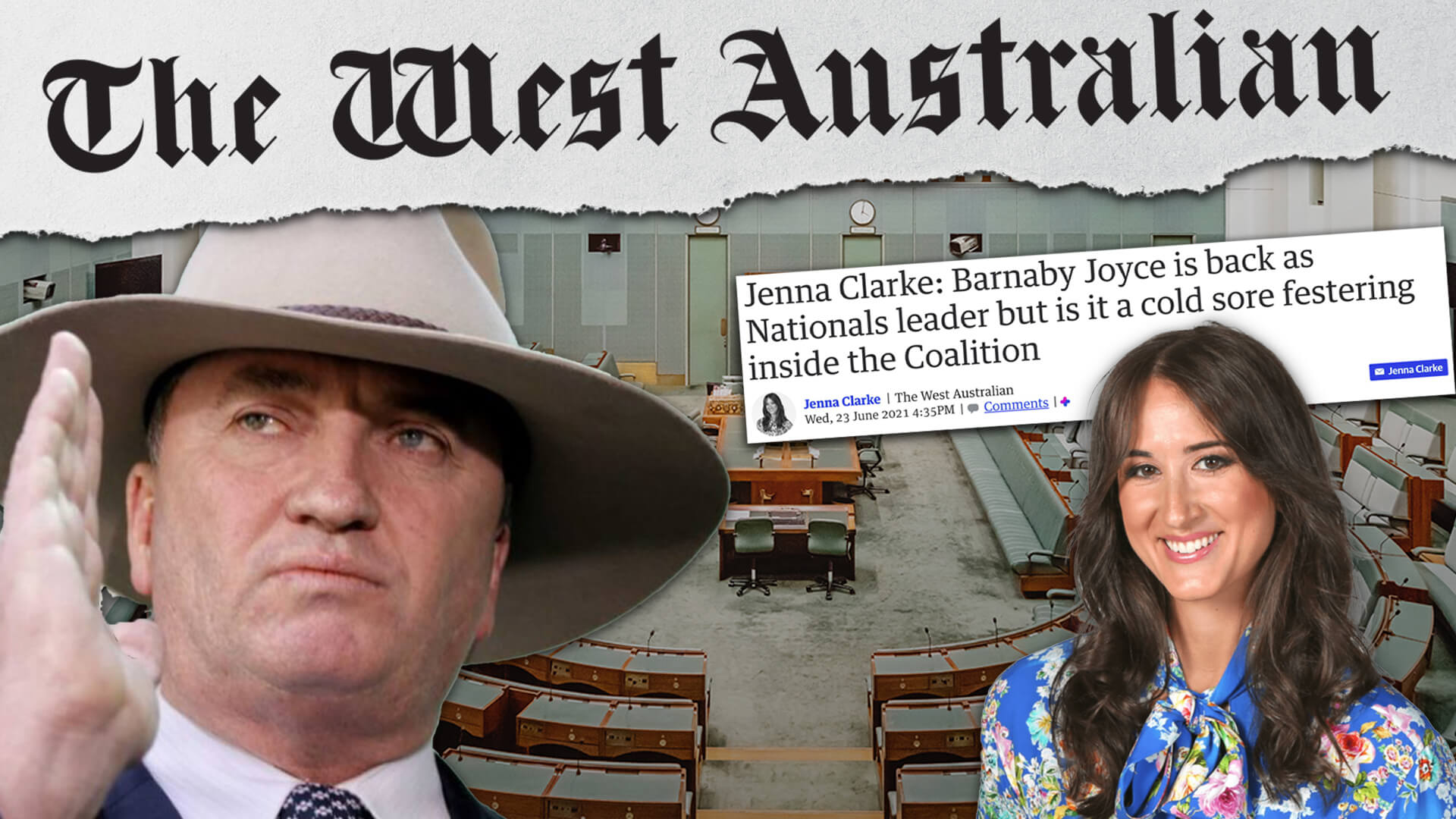 Since his resurrection as Nationals leader and Deputy Prime Minister on Monday, the mainstream media and his political enemies have been working themselves into a lather, coming up with evermore bizarre ways to sneer at him.

The Guardian called him a “chaos merchant”. The Nationals were just returning to their “default derangement”.

The Sydney Morning Herald’s Jenna Price went on and on trying to prove he was a “terrible, horrible, no good choice” for the nation’s second highest office. Talk about pearl-clutching.

But have a look at this one.

It’s from The West Australian, which is fast becoming one of the country’s most notorious elitist rags.

In an editorial, its assistant editor Jenna Clarke compared Barnaby Joyce to a case of herpes.

Yes, you read that right – and it bears repeating.

An editor of a major metro newspaper compared the Deputy Prime Minister of Australia to a case of herpes.

“It’s no wonder our leaders can’t defeat coronavirus with a functional vaccination program when they’re too busy grappling with breakouts and blisters like the National Party and Barnaby Joyce,” Clarke sneered.

“COVID is the virus everyone is worried about but Canberra’s herpes is back.”

Clarke went on to compare him to Frankenstein’s monster, but made of Teflon, complete with an illustration of the Deputy PM.

She ripped into his personal life. She rehashed the circumstances of his separation from his ex-wife, his relationship with his new partner and children, and unsubstantiated sexual harassment allegations.

Clarke said Barnaby was “an enigma who is more terrifying than Jason from Halloween” and likened him to former-US President Donald Trump (apparently that’s an insult in lefty inner-city newsrooms like The West Australian’s).

These characters aren’t bad at the insults and the personal attacks, but what’s really behind their distaste for Barnaby?

It comes down to two issues. Coal and same-sex marriage.

“His views on climate change – thorn in Scott Morrison’s post-G7 side – really only make sense to senators from regional Queensland and their thirst for coal,” Clarke whinged.

Oh really? They also make sense to the tens of thousands of Australians around the country who depend on coal for their livelihoods.

According to the other Jenna – Jenna Price – Barnaby “barely believes in climate change”. He also thinks “renewable energy is unreliable”.

But what really gets their goat is that Barnaby was a constant and faithful opponent of gay marriage.

According to Price, Barnaby is one of those politicians who “lectured us on how we should behave” by opposing it: not only is he Catholic, he’s anti-abortion as well.

“He was the bloke who voted against same-sex marriage legislation and then had an illicit affair with a much younger staff member,” Jenna Clarke whined.

Use your noggin, Jenna! He’s against two blokes getting hitched, mate, not divorce!

And if there’s an issue Australians can relate to it’s probably divorce. Sadly, it happens to far too many people. It’s something all of us have some experience with, either directly or around us.

It also happens to journalists and politicians across the political spectrum – never as publicly as Barnaby of course.

But we know why it was such a big issue when it happened to Barnaby. Please see above.

It boils down to this. They just can’t stand the idea that a politician who stands for things they hate is so popular.

And this is why Australia needs Barnaby exactly where he is.