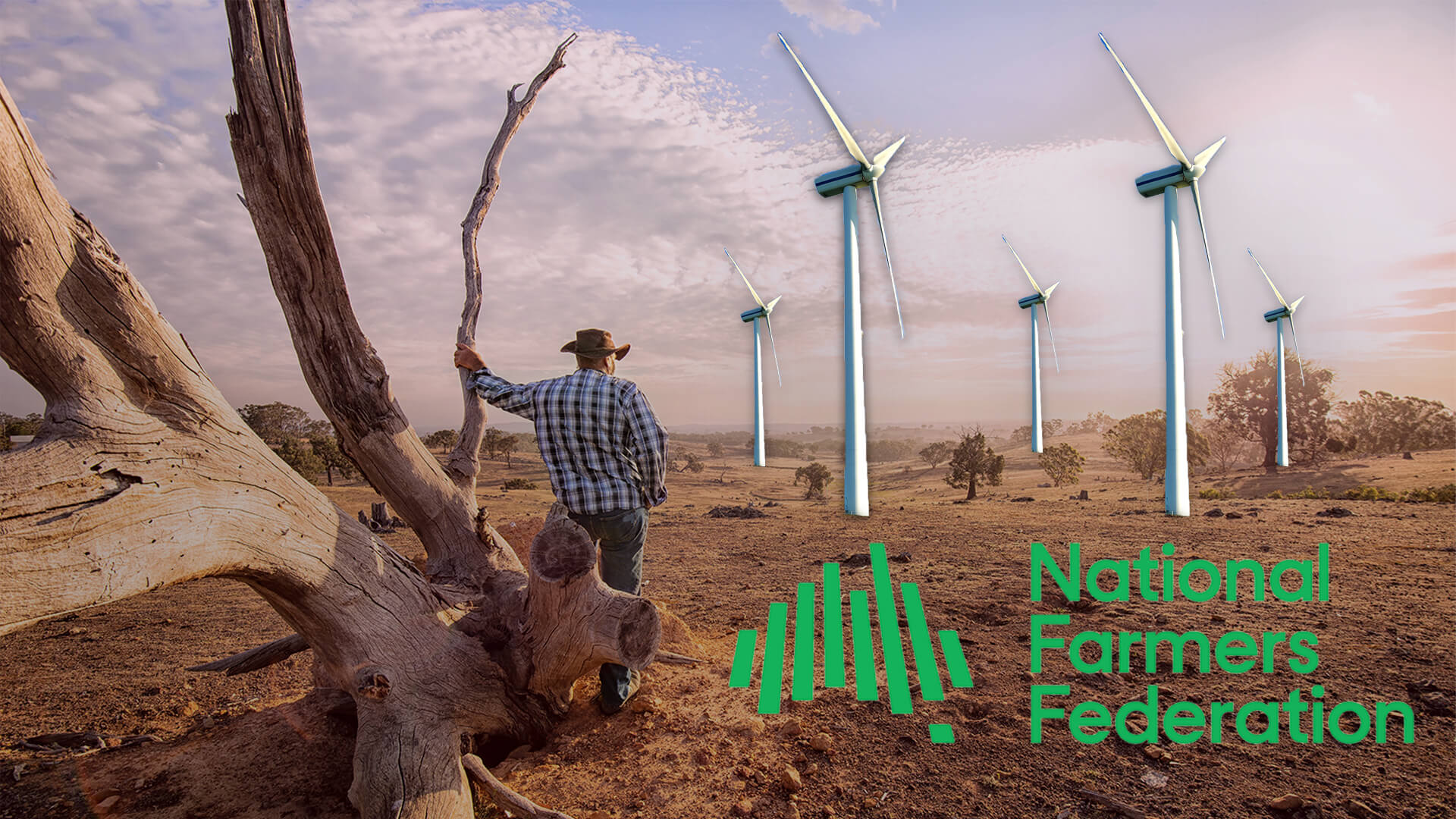 While many of our farmers are still struggling with or recovering from drought, the National Farmers Federation have demanded renewable energy zones be “at the centre of any regionalisation agenda” in a paper released last week.

With no mention of coal, gas or nuclear energy, and virtually no mention of the need for new dams, it’s clear the National Farmers Federation aren’t representing the interests of our primary producers.

Instead, they’d rather tow the politically correct line, calling for a net zero emissions target by 2050, the establishment of rural digital infrastructure, and urging caution about the prospect of Scott Morrison’s gas-led recovery.

The National Farmers Federation should be ashamed of itself.

Not only do renewable energy sources take up 1000 times more land space than coal and gas fired-power plants, but row after row of 157-metre-high wind turbines are a blight on our rural landscapes.

Unfortunately, it’s our farmers who are forced to cop the monstrosities on or near their land, while their power bills remain at record highs and their water bills continue to rise even though their access to irrigation water has been reduced.

As such, renewable energy is the very last thing which should be on the mind of the National Farmers Federation.

Instead, they should be focused on water security and water rights, which is, at the end of the day, a matter of national security, and a matter of life or death for our farmers.

As has been repeated time and time again on this blog, Australia has no shortage of water. The issue is it falls in the wrong places.

In fact, 80 to 90 per cent of Australia’s water falls north of the Tropic of Capricorn, in the largely unsettled top end areas of WA, NT and Queensland, with more than 50 per cent of the water lost to evaporation or runoff into the sea.

To solve this problem, we need to build the Bradfield Scheme – a ground-breaking nation-building project comprised of a series of dams and pipes stretching across the east coast of Australia.

In 1938 Dr John Bradfield – the same man who designed the Sydney Harbour Bridge – contended that one billion hectares of land could be irrigated across Queensland and South Australia by diverting excess floodwaters from northern Queensland to grow rice, cotton and wheat crops in drought-prone areas.

Using a series of dams, pumps and pipes, Bradfield’s plan was to move water down through Queensland river systems, across the Great Dividing Range and into regions in extreme drought.

To all the naysayers, only recently, the Berejiklian government designated a 90km water pipeline from Lithgow to a gold mine past Bathurst as a viable project of state significance.

Back in 1896, Premier Sir John Forrest commissioned a 530-kilometre water pipeline from Perth to Kalgoorlie, which is still supplying water to over 100,000 people as well as mines, farms and other businesses today.

And in 1949, the Snowy Mountains Hydroelectric Scheme was commissioned, consisting of sixteen dams, seven power stations, and created so much water storage that it had a larger capacity than the combined total of all dams built in the previous century.

History shows the Bradfield Scheme can be done. It is just a matter of political will.

Just as ripping up the Murray Darling Basin Plan, which has locked up our farmers’ irrigation water for “environmental flows” and allowed corporations and foreigners to buy and speculate upon water licenses even if they have no direct relationship to the land, is a matter of political will.

At the end of the day, water should not be treated as a commodity and water security should be a matter of national security.

Its time our politicians and the National Farmers Federation did their job properly, instead of virtue-signalling about renewable energy and the need to sacrifice irrigation for “environmental flows”.