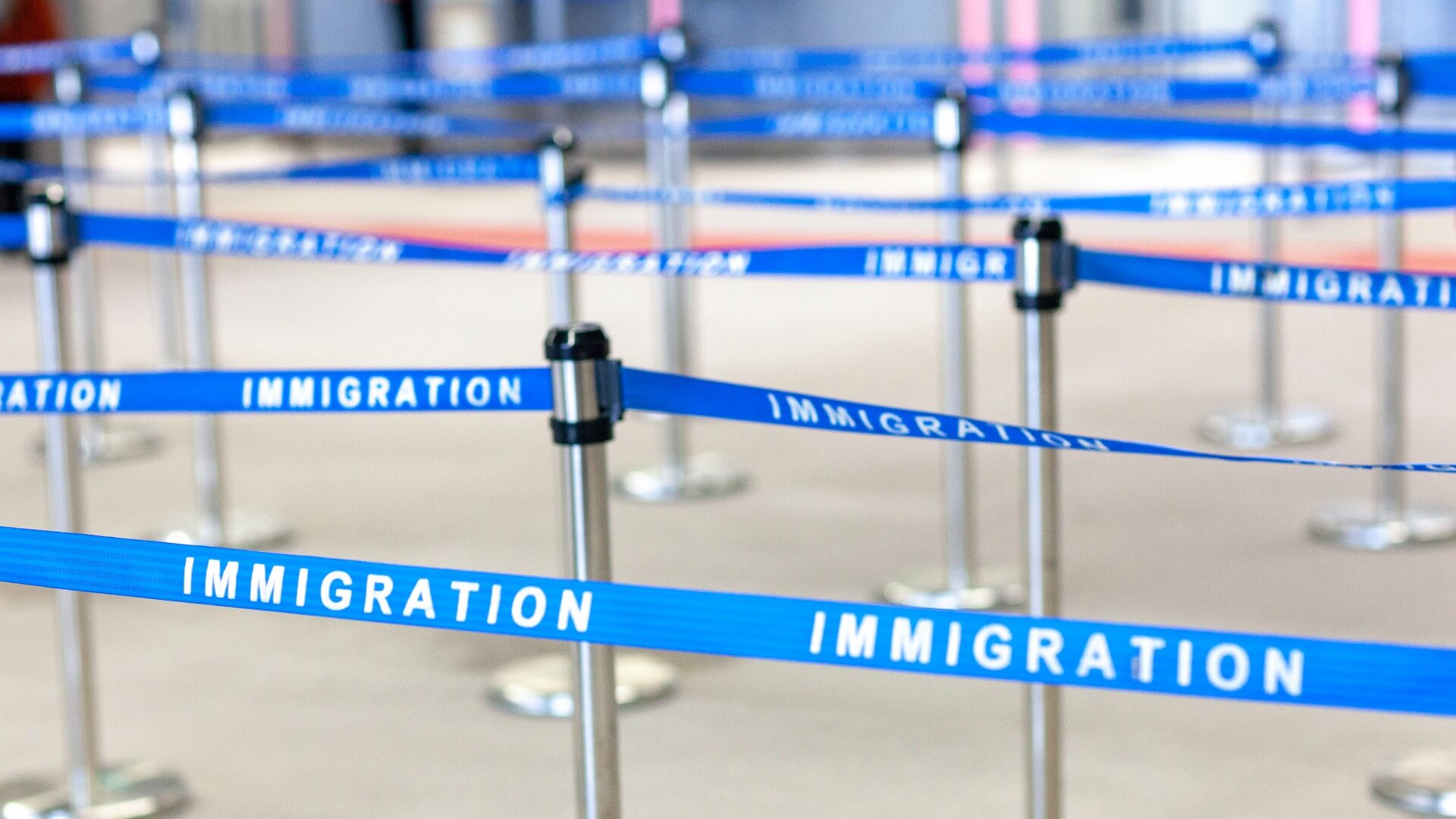 If you thought our politicians were bad, wait until you get to know the public servants who assist them from behind the scenes.

As reported by the Australian Financial Review, advice from NSW’s top bureaucrats to new Premier Dominic Perrottet has declared “Australia needs an explosive post-World War II-style immigration surge that could bring in two million people over five years to rebuild the economy.”

If you want to “rebuild the economy”, you’re much better off reflecting on how the Australian economy was reconstructed post-WWII: through nation-building infrastructure development.

Both the Chifley and Menzies governments understood the importance of re-establishing complex manufacturing and large-scale agriculture via the development of new infrastructure to aid the post-WWII recovery.

For example, in 1949, the Federal government embarked upon Australia’s largest ever engineering project: The Snowy Mountains Hydroelectric Scheme. Consisting of sixteen major dams and seven power stations, the project was so large that the water storage created between 1950-1960 had a larger capacity than the combined total of all dams built in the previous century.

The newly established Joint Coal Board, in the late 1940s and early 1950s, established a large exploration program to revamp the dying NSW coal industry; and the all-Australian made Holden was launched in 1948 – selling more than one million units by 1962.

The skills and knowledge of Essington Lewis – who opened the first steelworks in Newcastle and Wollongong as BHP Chairman, and produced Australian-made weapons such as the Cruiser Tank, CAC Boomerang fighter aircraft and Owen submachine gun during his tenure as Director-General of Munitions during WW2 – were put to use in peacetime, allowing manufacturing to reach a peak of 28 per cent of national output during the golden years of 1950-70.

However, today, the same figure is 5.5 per cent, and Australia’s infrastructure deficit has been a decades-long topic of concern for our top engineers, economists and security strategists.

For example, a report by Infrastructure Australia identified that there will be a $230 billion shortfall in critical infrastructure, crucial to the nation’s prosperity and strength throughout the next two decades; a figure that does not even account for the cost of diversifying Australia’s export base, reversing dwindling productivity, and ensuring industry can provide critical supplies.

The irony is that the NSW government’s plan to increase immigration to rebuild the economy will make this shortfall even worse.

However, while we talk of infrastructure development: it is not referring to another inner-city light rail project, heavily subsidised solar farm, or suburban road upgrade.

Three key examples are outlined below:

Although Australia exports more iron ore and metallurgical coal (the key feedstock into the production of steel) than any other nation, it only makes 0.3 per cent of the world’s steel – meaning Australia has missed out on the opportunity to value-add its two largest exports by more than 50 per cent.

However, if Australia connected its metallurgical coal fields in Queensland’s Bowen Basin with its iron ore fields in Western Australia’s Pilbara region via a transcontinental railway with steel smelters at either end, it could facilitate the world’s cleanest, most efficient steel supply chain.

40 per cent of the iron ore content Australia exports goes mainly to China.With the world’s largest bulk carriers transporting the material returning to Port Hedland empty, Project Iron Boomerang would save billions via the maximisation of supply-chain efficiencies.

Shane Condon, the key champion of the Project, argues that the project would create 50,000 Australian jobs in construction and 35,000 permanent jobs in operation.

Arguably more important however, is the way in which the domestic production of steel would reduce Australia’s dependence on China (which produces more than 50% of the world’s steel) as both an export market and source of imports. It would also benefit countries like Taiwan, Japan and India who are in the process of decoupling their economies from China.

At a cost of between $70-105 billion, Project Iron Boomerang could be central to Australia’s post-COVID-19 recovery. And with almost $3 trillion locked up in superannuation and at least $430 billion in internationally listed equities, the benefits may significantly outweigh the costs – just as we have seen with the Snowy Mountains Scheme, which still pays large dividends today.

For years, one of Australia’s most distinguished civil engineers, Professor Lance Endersbee AO, dedicated his time and energy to the construction of a railway between Melbourne and Darwin through the interior of Australia.

He foresaw the rise of Asia as the world’s future centre of economic power and argued that Australia must take advantage of the shift through the ‘reduction of freight costs and transit times’ considering it takes ‘usually a month plus, to get to anywhere in Asia’ through shipping; representative of a massive constraint on Australia’s export capabilities, especially in terms of time-sensitive goods. 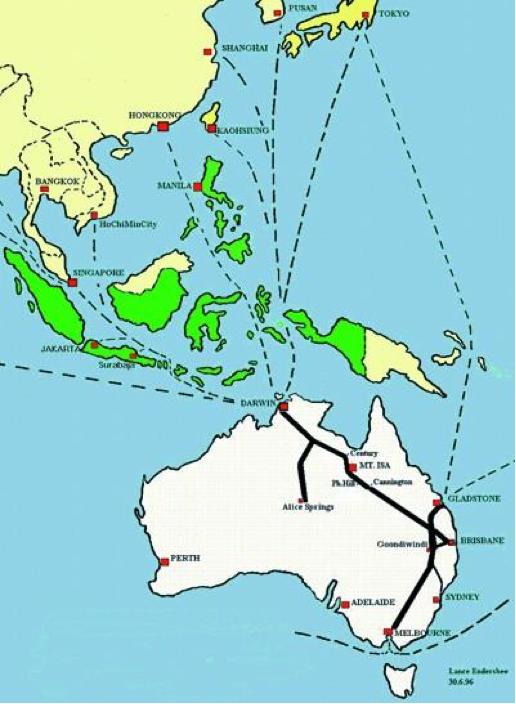 As such, Endersbee suggested that Australia fund a fast freight service from Melbourne to Darwin (covering the distance in 24 hours) which would link up with a fast ferry service from Darwin to Jakarta, Singapore, Taiwan and other large Asian ports – allowing farmers in the Murray to have their time-sensitive advanced horticultural produce at booming Asian markets in under two days.

Reaching market in under two days is currently untenable for most farmers because of the expensive nature of air transport. Which is why farmers for centuries have had to focus on goods that are not time-sensitive – like wool, wheat and live cattle exports: products with lower profit margins than, say, fresh fruit and vegetables.

China understood the importance of rail to its development and the competitiveness of its export markets. By 2019, China’s railway network grew to cover 86 per cent of cities with a population of 500,000 – up from only 28 per cent in 2012!

It is time Australia learned some lessons from its largest trade partner.

Between 80 and 90 per cent of Australia’s water, falls north of the tropic of Capricorn, in the largely unsettled top end areas of Western Australia, the Northern Territory and Queensland, and more than 50 per cent of this is lost to evaporation or runoff into the sea.

There is no shortage of water in Australia. It just lands in the wrong places. 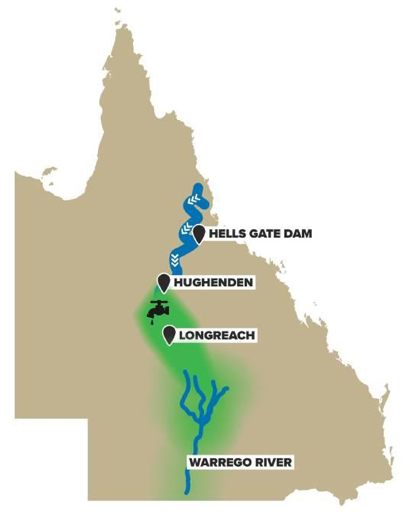 To address this, the Bradfield Scheme was proposed.

Pioneered by the designer of the Sydney Harbour Bridge, John Bradfield, the Scheme aims to divert the monsoon season flood waters of the Tully, Herbert and Burkedin Rivers southward via pipes, tunnels and dams to the Murray-Darling Basin and Lake Eyre for irrigation purposes.

If Bradfield’s original scheme came to fruition, it would be a source of irrigation water for farmers all over the eastern parts of Australia, and drought-proof the region into an increasingly uncertain future.

If our politicians found the will and abandoned their addiction to pragmatic and incremental microeconomic reform, Australia could come out of this recession with one of the most efficient steel supply chains the world has ever seen, an ability to export time-sensitive goods to the world’s most rapidly growing markets and irrigate/drought-proof the best agricultural land we have.

It is time to think big.