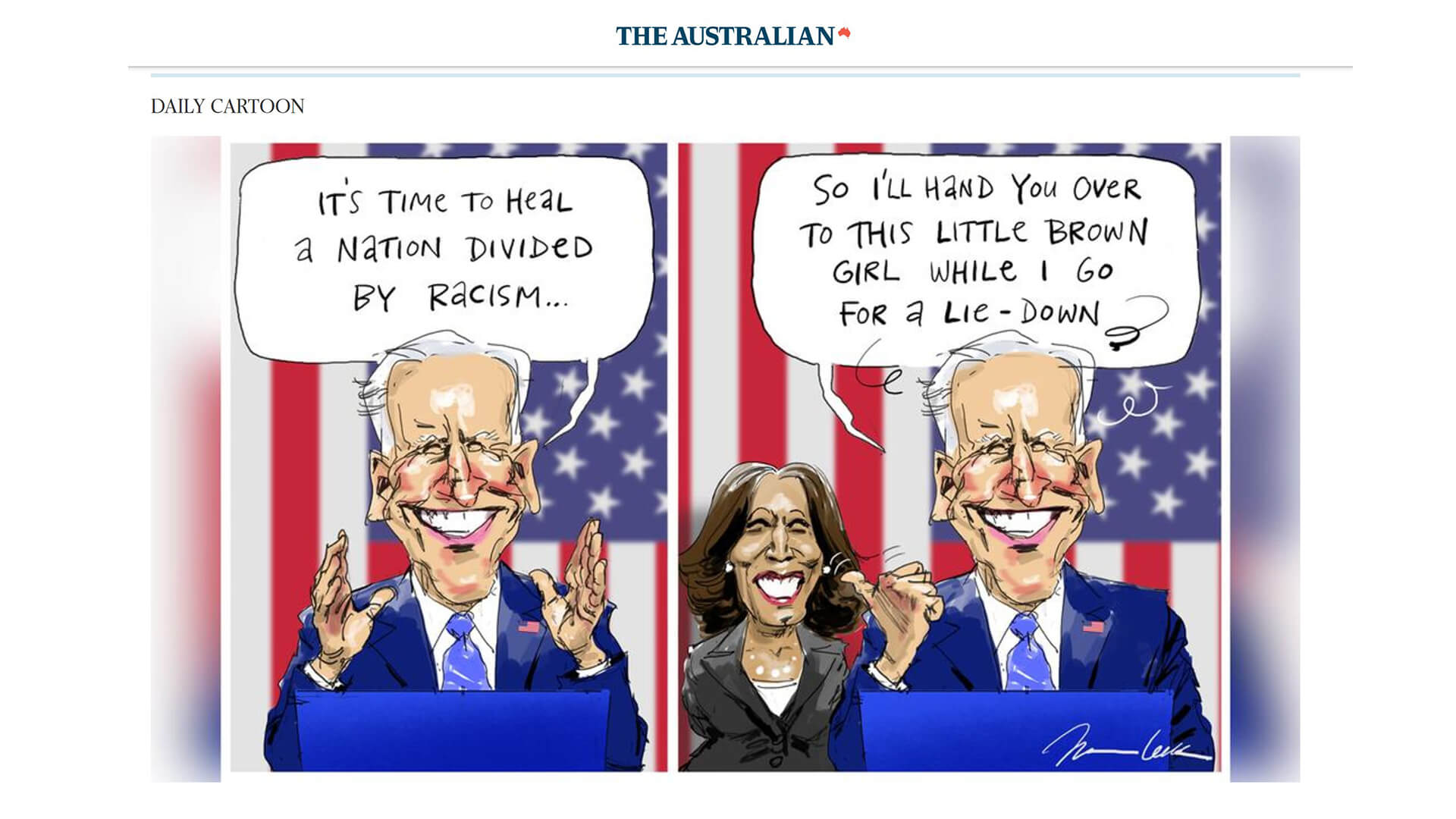 It’s a source of great irony that the left’s darling in the fight against President Trump, US presidential candidate Joe Biden, loves to play the race card.

“This morning, all across the nation, little girls woke up, especially little black and brown girls, who so often feel overlooked and undervalued in their communities,” Biden said last week, introducing vice presidential nominee Kamala Harris.

“But today just maybe they’re seeing themselves for the first time in a new way: as the stuff of president and vice presidents.”

Quite literally the only reasons Harris got this gong is that she’s:

So despite his reference to “little black and brown girls”, the left didn’t bat an eyelid.

He probably could have used ‘the n word’ and the left would have waved him through – he’s their man after all.

But when Johannes Leak, gifted cartoonist for The Australian, directly quoted Biden in a caricature of the left’s ironic racism, he received an entirely different reception.

The first panel of Leak’s cartoon depicted beaming Biden at a podium: “It’s time to heal a nation divided by racism …”

In the second panel, Biden continues as he is joined onstage by Harris: “So I’ll hand you over to this little brown girl while I go for a lie-down.”

For simply using Biden’s own words, Leak copped a merciless onslaught from the left’s offense police.

Because, of course, according to the left everybody on the right is racist and nobody on the left could possibly be so.

Around the world, movie stars and members of parliament piled on to the ‘I’M DISGUSTED BY THIS RACIST CARTOON’ train – to say nothing of the thousands of laymen lefties.

‘Johannes Leak cartoon of Joe Biden and Kamala Harris denounced as racist’ read the headline in lefty rag The Guardian, relishing the opportunity to rip into The Australian however unjustifiably.

Even former Australian prime minister Kevin Rudd got in on the action – writing a four-page complaint to the Press Council about the cartoon, denouncing it as racist for describing US vice presidential candidate Kamala Harris as “this little brown girl”.

It didn’t even help when The Australian’s editor-in-chief, Chris Dore, dutifully pointed out that “Johannes was quoting Biden’s words” and that “The intention of the commentary in the cartoon was to ridicule racism, not perpetuate it.”

Save your breath, buddy – they can’t compute.

This is how completely blind the left is to the racism inherent in their own condescending identity politics and tokenism – of which Kamala Harris’s nomination is a glaring example.

Instead of being offended by this [Biden’s] blatant playing of the identity politics card, which stereotypes people with racial tropes, the left takes to the barricades over a cartoon that uses Biden’s own words against him. The cartoon incisively skewers Biden — a former vice-president — for choosing a running mate not on the weight of her career and achievements but because of the identity politics appeal of her skin colour and her gender.

Indeed the left met the announcement of Harris’ appointment with thunderous applause for the same reasons the right rolled their eyes: it’s not merit based, it’s entirely condescending.

“Why do those on the outraged left feel they have every right to speak on behalf of ‘brown and black women and girls’ around the world, such as me?” asks Price.

“We little brown and black girls can speak for ourselves.”

Tim Blair put it best when he wrote:

Leftists know they cannot prevail in open debate, so they instead aim to remove conservative competitors from the contest.

That was why they went after Johannes [Leak], and why they’ll do it again. He’s a great talent. None on the left can match him, so he’s marked for ­destruction.