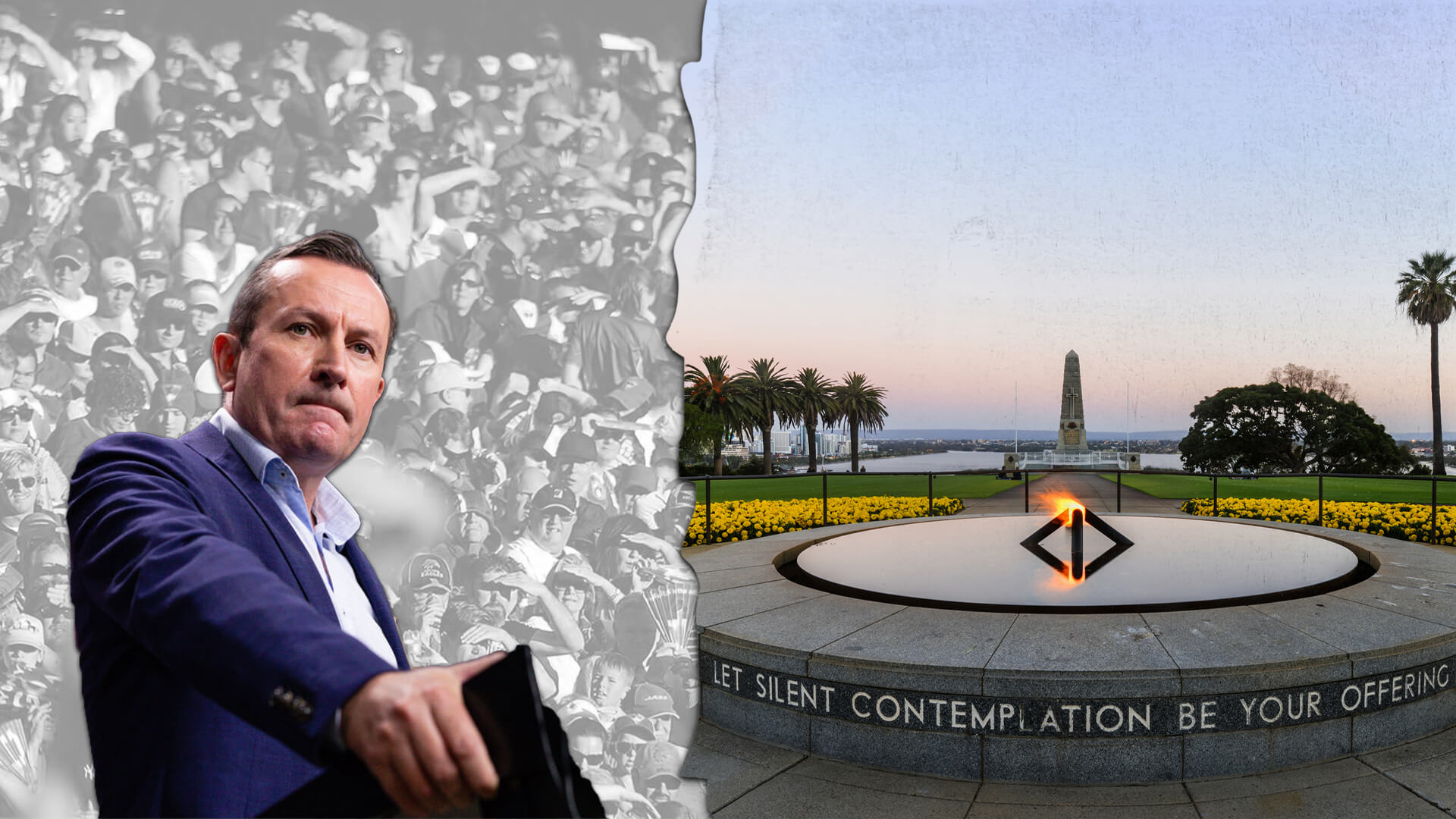 While the rest of Australia celebrated the sacrifices made by our fallen heroes and veterans at ANZAC day dawn services on the weekend, Western Australians were forced into lockdown by Premier Mark McGowan after his bureaucracy identified a mere two cases of COVID-19.

If the Premier can find a way to accommodate 60,000 people in Perth’s Optus Stadium for AFL matches (many of whom would’ve travelled shoulder to shoulder on a bus to get there), it’d be fair to assume he could manage COVID-safe ANZAC day dawn services.

Instead of allowing people to make decisions for themselves and their own families, the Premier decided to impose a blanket rule on everyone, shamelessly stripping West Australians of two of our most important freedoms: freedom of assembly and movement.

In fact, McGowan was so hellbent on cancelling ANZAC day in the name of so-called “public safety”, all Royal Australian Air Force flypasts planned for Western Australia’s ANZAC Day commemorations were cancelled.

Who knew Air Force flybys exacerbate the transmission of COVID-19?

As distinguished West Australian legal scholar, Professor Augusto Zimmermann, wrote “in the name of ‘health safety’, the WA government meanwhile has deliberately eschewed the need for respect of our fundamental rights and freedoms.”

For example, in the Premier’s 2020 Iron Ore Processing Agreement Amendment Act, Mr McGowan is exempt from criminal and civil liability with Clause 12 (2) stating that “the rules of natural justice (including any duty of procedural fairness) do not apply to, or in relation to, any conduct of the State that is, or is connected with, a disputed matter.”

The Act prevents citizens from obtaining information about what the Western Australian government is doing, with documents connected to a “disputed matter” exempt from freedom of information association laws, granting criminal immunity to the State and its agents.

Perhaps even more concerning is McGowan’s Emergency Management Amendment (COVID-19 Response) Bill which gives authorities the power to issue directions to a “class” or group of people and impose penalties including $12,000 fines, 12 months imprisonment for non-compliance and GPS tracking via electronic ankle bracelets.

To top it off, only one of the amendments to this bill has a “sunset clause” which guarantees its expiration at the end of an “emergency”, meaning the Act allows for “expanded security powers for an unlimited period of time” according to Professor Zimmermann.

Perhaps Mark McGowan has been learning the tricks of the trade from the authoritarian Chinese Communist Party which has employed many of the same tactics for decades now.

Afterall, with rhetoric worsening between Australia and the CCP this week, Premier McGowan’s only input was to urge the Morrison government to “tone it down”.

With the CCP calling Australia “gum under its shoe”, “sick” and an “American lapdog”, Australia has every right to stand up for itself.

Just as the West Australian people have every right to feel disillusioned with democracy after they were given two unsatisfactory options by the two major parties back in the March state election:

Tinpot dictator Mark McGowan and the 33-year-old greenie Zak Kirkup – the bloke whose signature policy was to shut down public coal-fired power plants by 2025 and reach net zero emissions by 2030.

Let’s hope the Morrison government learns from this whole debacle.

Instead, they hand power over to autocrats from the Labor Party like Dictator Dan and Mark McGowan.