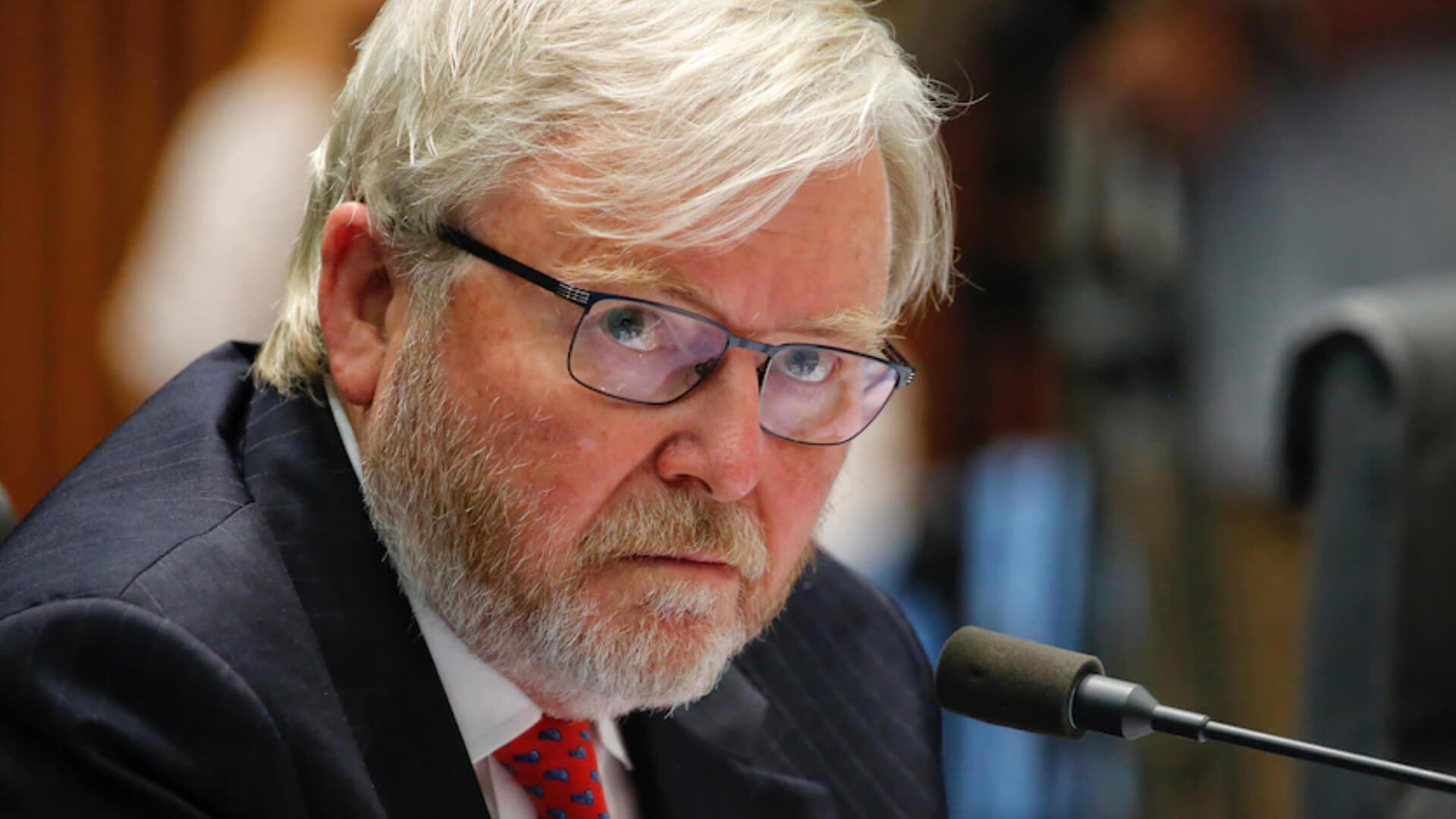 Here’s what Kevin Rudd had to say to the French and our response.

It sure is Kevin.

While I have long-been fiercely critical of the current conservative government of Australia in our domestic political debate on the overall direction of our country’s foreign policy, in the years since I left office, I have rarely put pen to paper to ventilate such criticism abroad. But given the Australian government’s gross mishandling of its submarine replacement project with France, as well as the importance I attach to Canberra’s strategic relationship with Paris, I believe I have a responsibility as a former prime minister to make plain my own perspective on this most recent and extraordinary foreign policy debacle by the current Australian government.

I believe the Morrison Government’s decision is deeply flawed in a number of fundamental respects. It violates the spirit and letter of the Australia-France strategic framework of 2012 and later enhanced by prime minister Turnbull in 2017.

Kevin, out of the 102 points in the “Joint statement of enhanced strategic partnership between Australia and France” signed on the 3rd of March 2017, only three points mentioned submarines. The rest of the document was about Australia and France agreeing to cooperate on political, economic, energy, transport, education, innovation, diplomatic and environmental matters. Unless the French decide to hold a grudge like a child, it should be business as usual.

It fails the basic contractual obligation of Australia to consult with the French Naval Group if Australia decided to radically change the tender specification from 12 conventional submarines to 8 nuclear-powered ones. It is wrong that Australia has not offered France the opportunity to re-tender (in part or in whole) for these nuclear boats, despite the fact that France has long-standing experience in making them.

As Prime Minister Scott Morrison made very clear, Australia was unable to change the order to revert them to nuclear subs because the French reactors would need to be serviced and refuelled during the lifetime of the sub, violating Australia’s moratorium on a civil nuclear industry - which you of course, would support.

Beyond these basic breaches, Morrison also failed to adhere to basic diplomatic protocols in not officially notifying the French government of its unilateral decision prior to the public announcement of the cancellation of the contract. And finally, there is Canberra’s failure to comprehend the repercussions of this decision for France itself – and for broader international solidarity in framing a coordinated response to China’s rise.

If you’re so worried about diplomacy Kevin, then where was your public condemnation of Malcolm Turnbull and Christopher Pyne’s decision to derail Tony Abbott’s negotiations with the Japanese to purchase their Soryu class submarines that would have arrived in the mid-2020s?

As Greg Sheridan wrote at the time, “many Japanese believe Malcolm Turnbull kowtowed to the Chinese, folding under their unsubtle pressure… some influential Japanese are even starting to publicly question Australia’s reliability as a strategic partner. There is a sense of Australia not being altogether a serious country.”

Japan’s Minister for Foreign Affairs, Seiji Kihara declared “it is very disappointing that we were not chosen…because the submarine was the symbol of Japan-Australia defence co-operation, and Japan brought both the civilian and government (sectors) together on the project”.

While a paper launched by the US Assistant Secretary of Defence Robert Scher said, “subject to being satisfied that the Japanese submarine proposal will meet capability requirements, minimise risks and provide value for money, Australia’s final decision on its replacement submarine capability should reflect the substantial strategic and operational benefits of partnering with Japan (which do not exist in the case of France or Germany).”

Note: we skip the two next paragraphs of the article. Kevin talks about how important Australia’s long and intimate military history with France has been, ignoring the fact the same stands for the United States. He then gives a dull account about how he signed the aforementioned “Joint Statement of Strategic Partnership between France and Australia” in the next.

The point is that the Australia-France submarine contract is not just a commercial agreement. It occurs within this wider official framework. Indeed, it became the ballast of the relationship we had envisaged together back in 2012. The problem for Morrison is that his unilateral decision of 17 September to cancel the submarine project violates both the spirit and, one reading, the letter of our Joint Declaration. Against this background, French Foreign Minister Le Drian is right when he describes Morrison’s action as “a stab in the back”.

Again Kevin, don’t you see the irony that the Japanese felt the very same way when the “modern Liberals” snubbed their Soryu submarine proposal for the French Barracuda class? Why should we give the French special treatment? Surely you can admit our strategic relationship with the Japanese is slightly more important than our strategic relationship with the French, given the geographical and political realities of the Asia-Pacific region in which we live?

Second, while I am not privy to the detail of the contractual agreement between France’s Naval Group and the Australian Department of Defence, it strikes me as a basic protocol that if one of the contracting parties (in this case Australia) was to fundamentally change the project specifications (i.e. from conventional to nuclear-powered subs), it would first require that party to at least notify the other party. To do otherwise would be tantamount to deceptive and misleading conduct. But it seems that the Morrison Government failed to inform Naval in advance.

Why are you suggesting the only reason the Prime Minister cancelled the French submarine contract is because the Barracuda-class weren’t nuclear? There was much more to it than that, Kevin. The first of the French submarines were not going to arrive until the mid-2030s, meaning most of the submarines would be technologically obsolete upon arrival. The program was already at the very least $40 billion over budget. Now, the Morrison government is planning to lease and share existing American and British nuclear-powered submarines years before the acquisition of our first ones in around 2040 – narrowing the risk Australia’s new subs will arrive too late to counter China’s rapid military expansion in the Indo-Pacific.

This brings us to the third error on the part of the Morrison Government. If Morrison had in fact changed course from conventional to nuclear-powered submarines for good technical reasons, then why wouldn’t he re-open competitive tenders for bids from France, the UK and the United States? All three have nuclear-powered boats. All three know how to manufacture them and maintain them. Instead, Morrison decided to limit bids to the Anglosphere alone. This makes no sense in terms of getting the best value for money for the Australian taxpayer. Nor is it fair to our French strategic partners.

We don’t have time for a competitive tender, mate. We knew our current Collins Class submarines would be obsolete by the mid 2020s, and yet we wasted a decade tossing up between the Japanese and French subs. We need to make a decision now and stick with it, and that is exactly what the Prime Minister has done.

Morrison’s failure to understand the wider foreign policy repercussions of his decision is perhaps the most appalling of all. It has affected European solidarity in forming and consolidating a common strategy for dealing with the impact of China’s global and regional rise. On the eve of the next Quad Summit in Washington, it has rekindled doubts among the other members of the Quad that there is now an inner group of the US and Australia (and now prospectively the UK) and an outer group of India and Japan – doubts already debated in Delhi following America’s unceremonious exit from Afghanistan which delivered a significant strategic win to India’s principal strategic adversary Pakistan. Third, Morrison’s decision has further polarised South East Asian strategic positions on China and the United States where China has already made considerable economic and foreign policy gains. And finally, it lends grist to the mill in China’s global propaganda apparatus that the public political theatre of the submarine announcement with the US and the UK is all about one single strategic objective: containment.

This is like the classic argument that Australia must “take the lead on climate change” to set an example for the rest of the world. Morrison’s decision to cancel the French submarine contract will not destroy European solidarity and jeopardise the united allied front against Chinese militarism and expansionism. India and Japan are smart enough to understand that the cultural bonds between the US, UK and Australia will result in more intimate ties, but won’t undermine military and strategic cooperation. Finally, should we really be concerned about how the Chinese Communist Party will portray Morrison’s decision to put Australia’s defence first? Who cares, mate? Most of the world, including India and Japan, can see right through their “global propaganda apparatus”.

As a former prime minister, I deeply regret the way this decision has been handled by the current Australian government. The cavalier manner in which it has been done does not represent the views of the vast majority of Australians towards France. There may be important strategic or technical reasons to change course with the type of submarines that Australia now needs to build. But none of these justify the treatment of France in this way. These are major matters of state. And they will be deliberated on by the Australian people soberly during our upcoming national elections.

They sure will mate. I suspect you’ll be just as surprised at the outcome as you were when Tony Abbott took 18 seats off you at the landslide 2013 federal election.