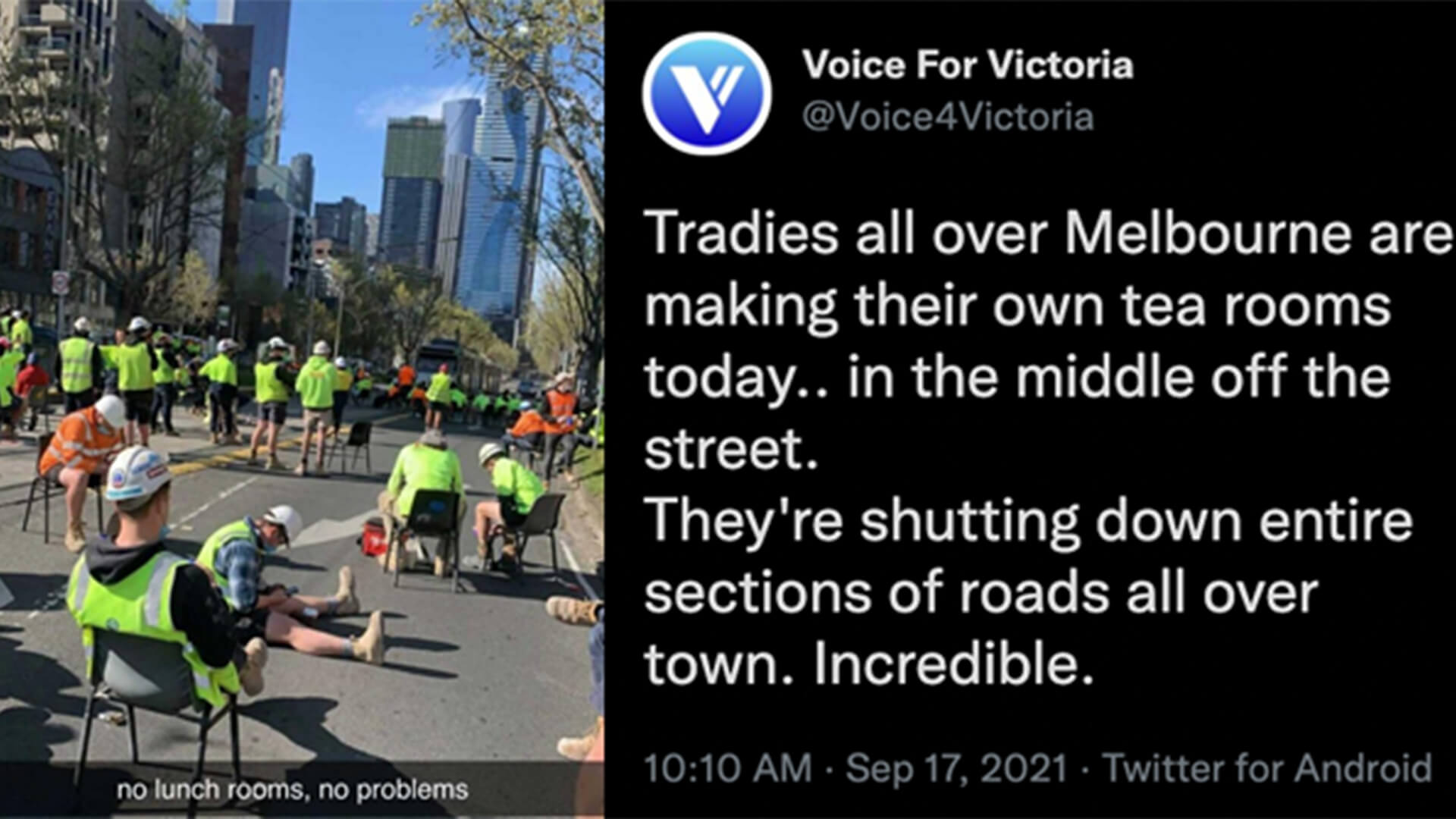 The Victorian government’s obsession with COVID-19 is just plain inhumane and people have had enough.

Earlier this week, Dictator Dan’s regime announced Victoria’s construction industry will be subjected to a lockdown compliance blitz with the primary target to be “tea rooms”.

The Victorian government has so much time on its hands, it’s now trying to stop hard-working tradies from having a snack, drink or cigarette with their mates.

According to COVID-19 response commander Jeroen Weimar, “transmission appears to be happening in tea rooms – it’s where we probably drop our guard the most and it’s where we physically drop our masks to eat and drink… Tea rooms are not safe places in fact for many of us at work, they’re probably now the most dangerous place.”

“I need to be clear about this, there will be zero tolerance. The time for warnings and admonishment is over, the industry needs to take these responsibilities seriously.”

What was the response from Melbourne’s tradies?

Well although the mainstream media hasn’t reported on it yet of course, photos have emerged this morning of tradies having their “tea break” in the streets.

As reported by the “Voice for Victoria” Twitter page, “tradies all over Melbourne are making their own tea rooms today… in the middle of the street. They’re shutting down entire sections of roads all over town. Incredible”.

Bet these blokes can’t wait to join our campaign to UNLOCK AUSTRALIA.

We’re sick of it.

Time to stop all this nonsense on December 8, the first day of the Ashes.

No more playing politics with the rights and freedoms that were bestowed upon us by a much higher power than the mobs of career politicians, party hacks and public servants who run the states.

By December 8, everyone who wants the jab has had the opportunity to get it.

We’re sick of people like Dictator Dan thinking he can stop the spread of this virus with stupid rules that take away everything we look forward to during a long day at work – like family dinners, a schooner at the local, or a smoko with the boys.

Most of all, we’re sick of paying your overinflated wages so you can lecture us about “taking responsibility” and assure us “we’re all in this together” when you haven’t even taken a pay cut.

Get out of our bloody lives already!