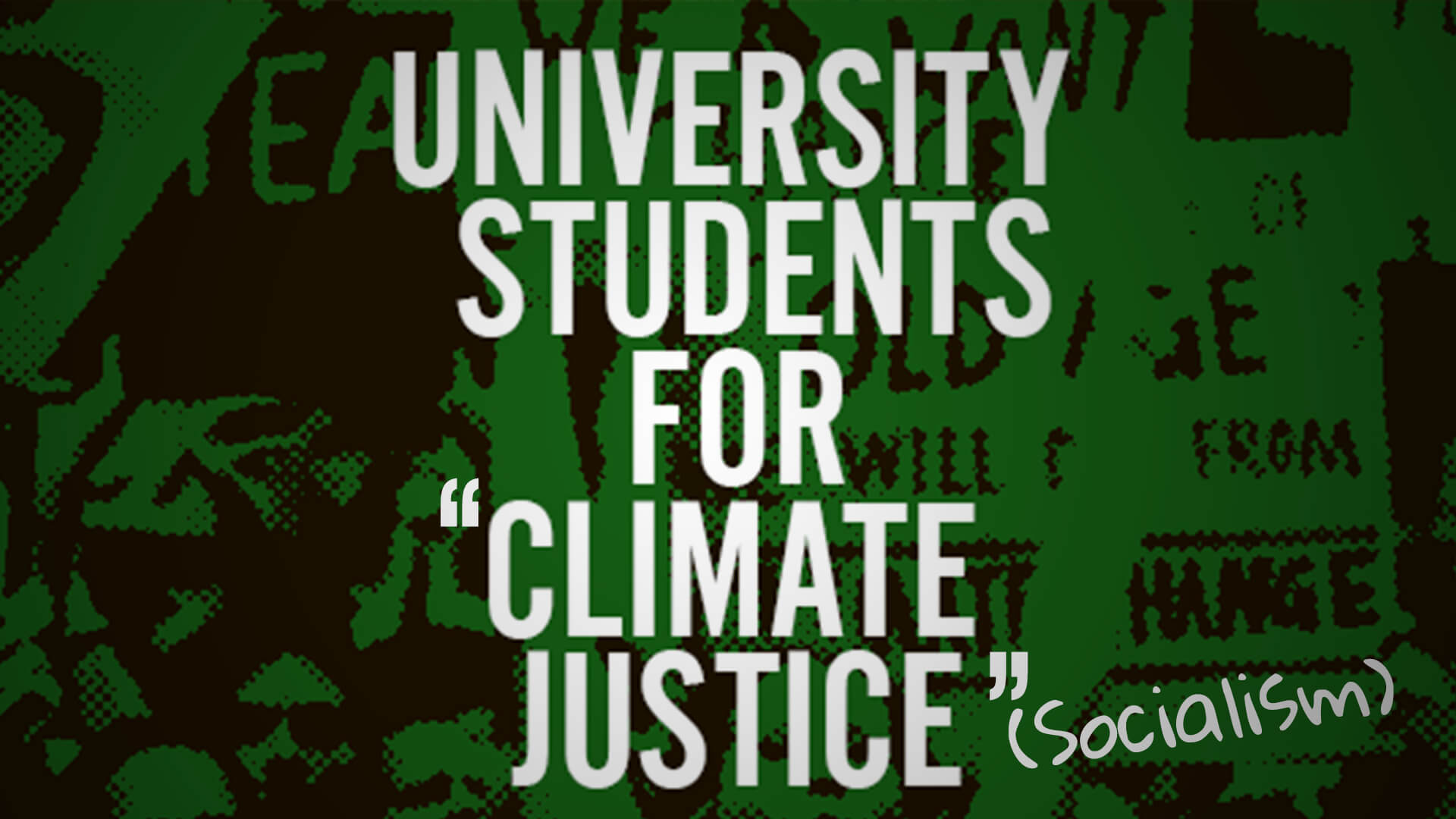 “The actual goal of people who claim to be very concerned about climate change and want to reduce carbon emissions is to get the society move away from capitalism and take down power structures.”

In fact, radical lefties pushing their climate alarmist agenda are telling us point-blank that ending climate change requires the end of capitalism…  But no one seems to be listening.

As the Marxist co-convenor of Uni Students for Climate Justice (ie. the delightful kids who held the Sack ScoMo protests) explains, they’re more about bringing down the system than addressing climate change:

Uni Students for Climate Justice want system change. We recognise that profiteering under capitalism is one of the core reasons why we’re are dealing with the current crisis that we’re in.

We recognise that the system that we currently exist under consistently prioritises profit over the needs of the majority of ordinary people.

Life in Australia is just so hard – what with all the oppression and all – these kids have had enough.

Founding member of Extinction Rebellion, Stuart Basden, writes at length about how our society must be deconstructed.  Here’s a revealing snippet:

Extinction Rebellion isn’t about the climate. It’s not even about ‘climate justice’…  we’re missing the deeper problems plaguing our culture. And if we don’t excise the cause of the infection, we can never hope to heal from it.

…never say we’re a climate movement. Because we’re not. We’re a Rebellion. And we’re rebelling to highlight and heal from the insanity that is leading to our extinction.

Even the lead author of the Fourth Assessment Report of the UN Intergovernmental Panel on Climate Change (IPCC) told us straight:

“…one has to free oneself from the illusion that international climate policy is environmental policy.  Instead, climate change policy is about how we redistribute de facto the world’s wealth...”

So it’s not about the climate, and yet…

Australia has vandalised its electricity grid and caused blackouts in Victoria by closing coal-fired power stations without replacing their base-load power.

It’s not about the climate, but…

Everyone’s electricity prices have doubled as climate alarmists with a vested interest pocket millions of dollars in taxpayer subsidies to build windmills and solar panels which can’t keep the lights on let alone jobs in Australia.

In the words of Sky News Host Chris Smith, “ill-informed socialists are using climate change to bring down a conservative government.”

That’s why, in a collective summer dummy spit, the left are using every opportunity to bag the Morrison Government…  For causing the bushfires.

If only the Coalition had closed down more coal-fired power stations, turned the Hunter Valley and Central Queensland into ghost towns, and hiked electricity prices even higher – that would have stopped the bushfires!

But this hysteria didn’t stop ScoMo from dropping a pearler of a truth bomb amidst the furore:

“We could close down every single power generation facility in the country and those emissions would be taken up by China in about nine days.”

Talk about a reality check.

Clearly fearing for her life, ABC journalist Annabel Crabb tweeted Morrison’s quote with this disclaimer: “And before you go off - I'm just telling you what he said. I'm not endorsing the remark.”

Seriously, Crabb?  Our PM stated a fact – not an opinion – what journalist worth their salt disendorses a fact for fear of backlash?

Hold fast, PM.  From the anarchists’ own mouths, their goal isn’t “climate action”.  Their aim is the fall of capitalism, the devastation of Australia’s economy, and the redistribution of the precious little that remains.