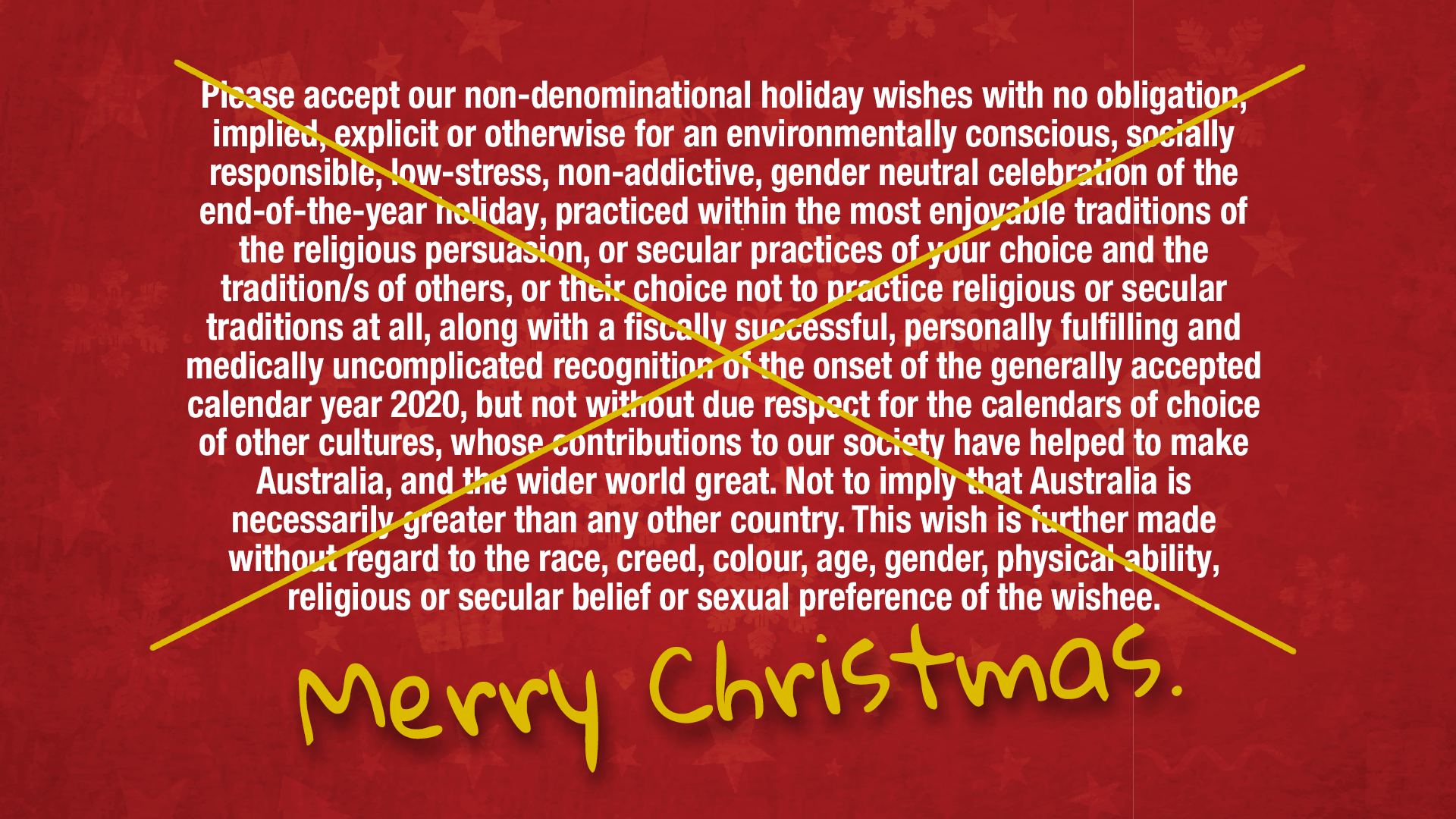 What’s in a name?  Ask the PC thought police.

They’re so obsessed with enforcing the “inclusion” of every other culture under the sun, Aussies are being told to ditch “Christmas.”

The latest oracle from The Diversity Council (yes, sadly, that is an actual thing) tells offices that their ‘Christmas party’ might offend non-Christians, so they best to call it ‘an end-of-year holiday party’.

Businesses are told to be “sure your end-of-year holiday party is inclusive of both Christian traditions and others”.

Instead of “Merry Christmas”, “Holiday Greetings” is the preferred terminology in the office at this time of the year.

And while the council lectured us on how to water down a major festival which we, like many western countries, inherited from our Judeo-Christian heritage, The Diversity Council encourages celebration of Buddhist Bodhi Day, Hindu Diwali, Jewish Hanukkah and Islamic Ramadan.

This while lefties everywhere mock the idea that there is a war on every tenet of western civilisation.

By reducing Christmas (ie. “end-of-year holiday”) to the same level as the festivals of other cultures, the Diversity Council proves otherwise.

This is Australia for crying out loud.

No one is stopping Australians from around the world from celebrating their traditions, so why is The Diversity Council trying to stop us from keeping our own?

Christmas belongs in pride of place in our culture.

But we can’t expect any better from the council which is chaired by the most unpopular Australian of the Year ever: former chief of army David Morrison who shot to fame in 2016 for telling businesses to stop using words like “you guys”, “mankind”, and “chairman”…

Because we can’t have that kind of bigoted gendered language in the world place.

It comes as no surprise that The Diversity Council gets money from a swag of government departments and taxpayer-funded organisations...  Including “our”  ABC.

Of course Fran Kelly and Tony Jones both signed off Insiders and Q&A with “Holiday Greetings” instead of Merry Christmas.

Of course the ABC is part of the war on Christmas.

Well MERRY CHRISTMAS, folks.  Christmas, behind Easter, is the defining cultural tradition of western countries like Australia and it’s not going anywhere on our watch – like it or lump it.