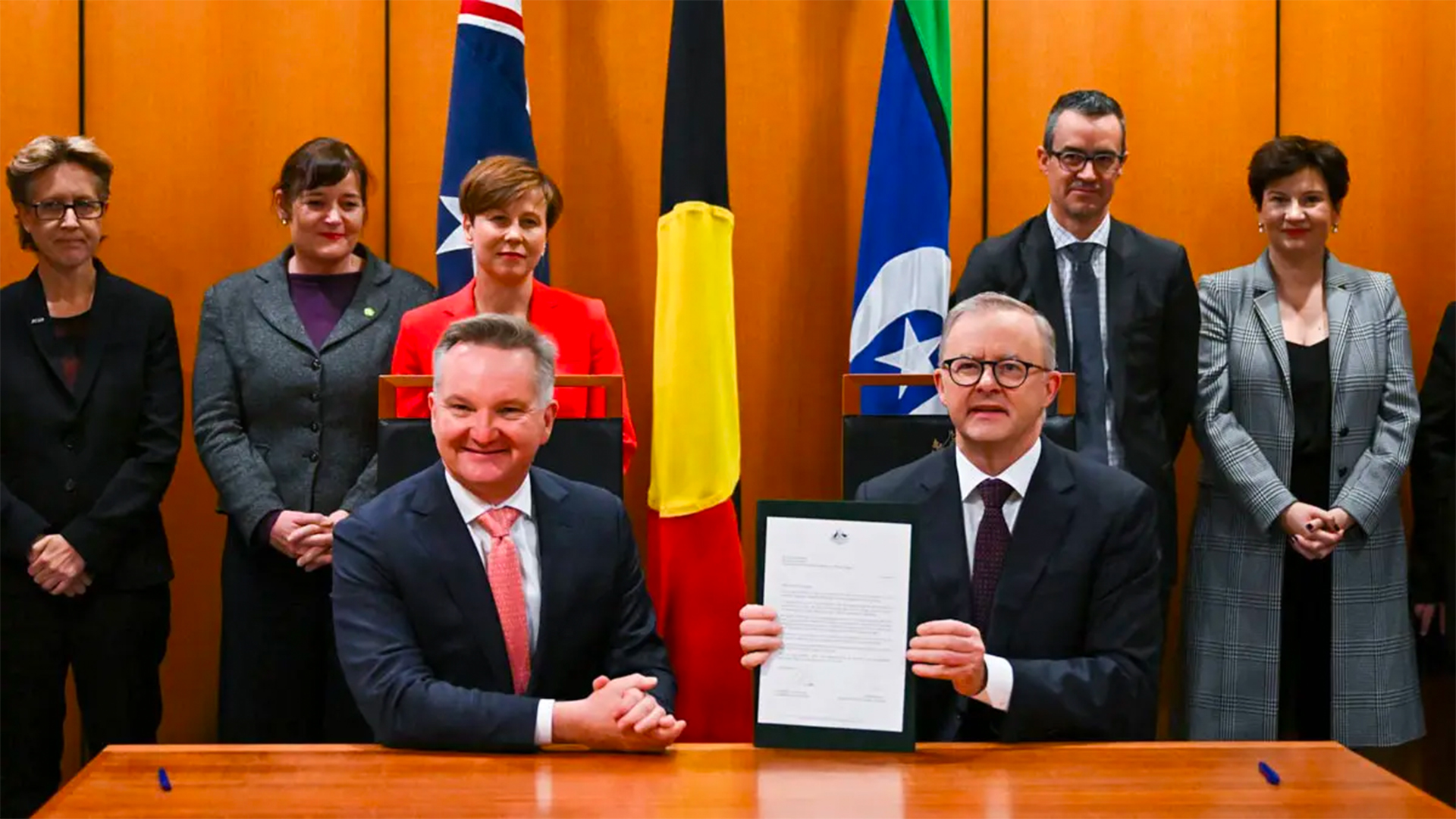 The timing is UNTHINKABLE.

While Australia’s heavily subsidised wind and solar generators struggle to keep the lights on, Prime Minister Anthony Albanese signs a letter to the United Nations promising to deliver cuts to Australia’s emissions by at least 43 per cent by 2030.

Seriously, Albo? What are you thinking, mate?

How on Earth is Australia going to get to 43 per cent lower emissions in EIGHT YEARS while nuclear power is still illegal?

Are you going to further VANDALISE our grid with wind and solar imported from Chinese factories that are powered by Xi Jinping’s growing fleet of coal-fired power plants, each burning coal exported from the Port of Newcastle?

Will you throw MORE taxpayer money to green billionaires like Twiggy Forrest who reckons he can power the nation with “green hydrogen” that has to be compressed to 700 times atmospheric pressure and liquified down to minus 283 degrees Celsius – processes that use incredible amounts of energy?

Maybe then it will be MORE bans on oil, gas and coal exploration, drilling, mining and processing? MORE subsidies to the most inefficient forms of energy generation on the market? MORE selling of critical energy assets and infrastructure to foreign-owned companies that have no responsibility to ensure adequate supply can be maintained during unforeseen external shocks like a war in Europe?

There’s no time for stuffing around with feel-good United Nations virtue-signalling anymore!

FOR YEARS, ADVANCE has been warning that blackouts are an inevitable given the state of our energy grid…and now that blackouts have become a reality Labor is STILL drinking the Kool-Aid on green pie-in-the-sky fantasies like net zero emissions and transitioning away from fossil fuels.

The rest of the world is LAUGHING at us, mate!

Australia produces 500 MILLION TONNES of coal every year, and yet our coal-fired power stations don’t have the cash to buy OUR OWN black gold because parasitic and subsidised renewable energy companies have made them unprofitable.

Australia is the WORLD’S LARGEST GAS EXPORTER, and yet we’re facing a CRITICAL gas shortage that is driving our manufacturers out of business.

Australia hosts ONE-THIRD of the world’s uranium reserves, yet Labor doesn’t have the guts to legalise nuclear power by changing just four words – “a nuclear power plant” – in the Environmental Protection and Biodiversity Conservation Act of 1999.

And many geologists say Australia has as much oil as SAUDI ARABIA in South Australia’s far north, and yet the entire nation is paying well over $2/litre at the bowser on top of the fuel excise tax cut.

Australia exports 70 per cent of the world’s seaborne steelmaking materials (iron ore, coking coal and limestone), but produces LESS steel than the Dutch and Egyptians (only 0.3% of global supply).

We’ve LOST more than 200,000 manufacturing jobs in the last 30 years and over the last decade have seen a decline in our manufacturing output in real terms for the first time ever.

We CAN’T profitably produce our own fertiliser because gas and power prices are too high.

But the best Anthony Albanese and Chris Bowen can come up with is MORE subsidies to solar, wind, batteries, transmission infrastructure and some pointless, irrelevant letter to the United Nations that will do nothing but make a few bureaucrats and political staffers feel good about themselves while the elderly freeze at night and our businesses go broke.

What a SICK joke…