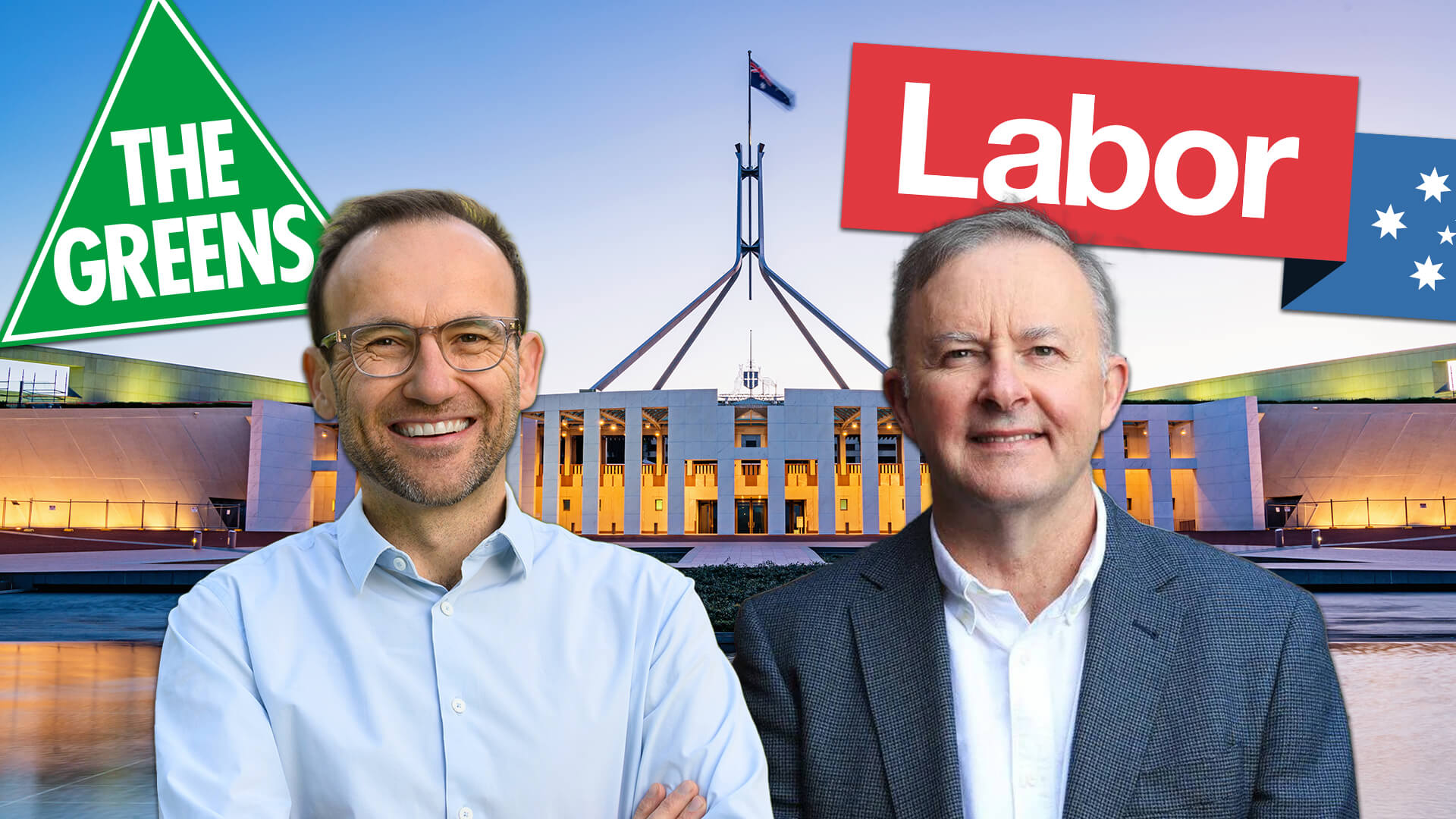 Although Labor is trying their best to deny it, we all know what’s coming if each-way Albo waltzes into the Lodge at the upcoming election.

Craving the parliamentary majority he needs to really call the shots, Albo will sign a cushy alliance with Adam Bandt and the Greens – just as what happened when Julia Gillard, Bob Brown and Adamn Bandt suddenly became best mates in 2010.

Albo will be forced to make concessions to Bandt and the Greens on climate hysteria.

According to Bandt, the Greens will push the next government “further and faster” on climate, with their existing policies including phasing out thermal coal and a 75 per cent emissions reduction by 2030.

It would be a case of “improving, not blocking” when the Greens work with Labor, Mr Bandt said, but there would be no deal with the Coalition.

“We would kick the Liberals and Scott Morrison out; they don’t deserve another term,” he said.

Despite plans to phase out thermal coal mining, Mr Bandt admitted the industry had been powering the nation and the party needed to do more to explain how to transition areas dependent on fossil fuels.

“We owe coal and gas workers a debt of thanks for helping power our country. But change is coming,” he said.

“I’ve been travelling to coal communities around the country listening to what people have to say. We will take a very clear position this time. The best job for a coalminer is another mining job.”

Mr Bandt said those jobs would be in supporting renewables, green hydrogen and manufacturing.

First, Adam Bandt will destroy our thermal coal mining industry – a decision that would plunge tens of thousands of people into unemployment in the Hunter Valley and Queensland’s Galilee Basin. Notice how he only focuses on thermal coal? Not even Bandt is stupid enough to think he can replace metallurgical coal in steelmaking with some unproven hydrogen smelting process.

Next, he will pressure Labour into believing the bizarre proposition that “change is coming” and the transition to renewables is inevitable and non-negotiable.

Get out of Toorak and go to the industrial zones of India or China, mate! There’s no “change coming” as far as the people there are concerned. For miles you’ll see coal-fired power plants, oil refineries, aluminium smelters and all the smog, jobs, self-sufficiency, independence and productivity that comes with them. Anybody with any sense of proportion knows Australia’s emissions are a fart in the wind.

Then there’s the critical point that our thermal coal is the best in the world. For instance, Whitehaven Coal’s thermal coal exports from the Hunter are of such a high-quality, coal-fired power plants in India, Japan, Korea, Philippines and Vietnam use it to mix with their domestically produced low-quality high-sulphur coal. If we stop exporting, emissions will go up and the efficiency of coal-fired power in developing nations will decrease.

Again, for someone who hates coal so much, Adam Bandt really has no clue what he’s talking about.

Finally, Bandt will force Labor into believing an industrial economy can be powered by weather-dependent solar panels and wind turbines that are manufactured in coal-powered Chinese factories.

If that doesn’t work, he’ll fall back on the pie-in-the-sky green pipedream of green hydrogen – perhaps the most inefficient way of producing power given it requires incredible amounts of water and energy to power anything on a large industrial scale.

Or he’ll combine the two!

In keeping with green hydrogen theology, that 750 TWh requires 285,000 MW of intermittent wind and solar capacity. That is almost five times Australia’s total generation capacity from all sources (60,000 MW).

It is a lofty goal considering the last twelve months of wind and solar generation in the entire country would produce just over one million tonnes of green hydrogen.

Although we can’t stand the “modern Liberal” types here at ADVANCE, the prospect of this mob running the joint sure does put things into perspective…