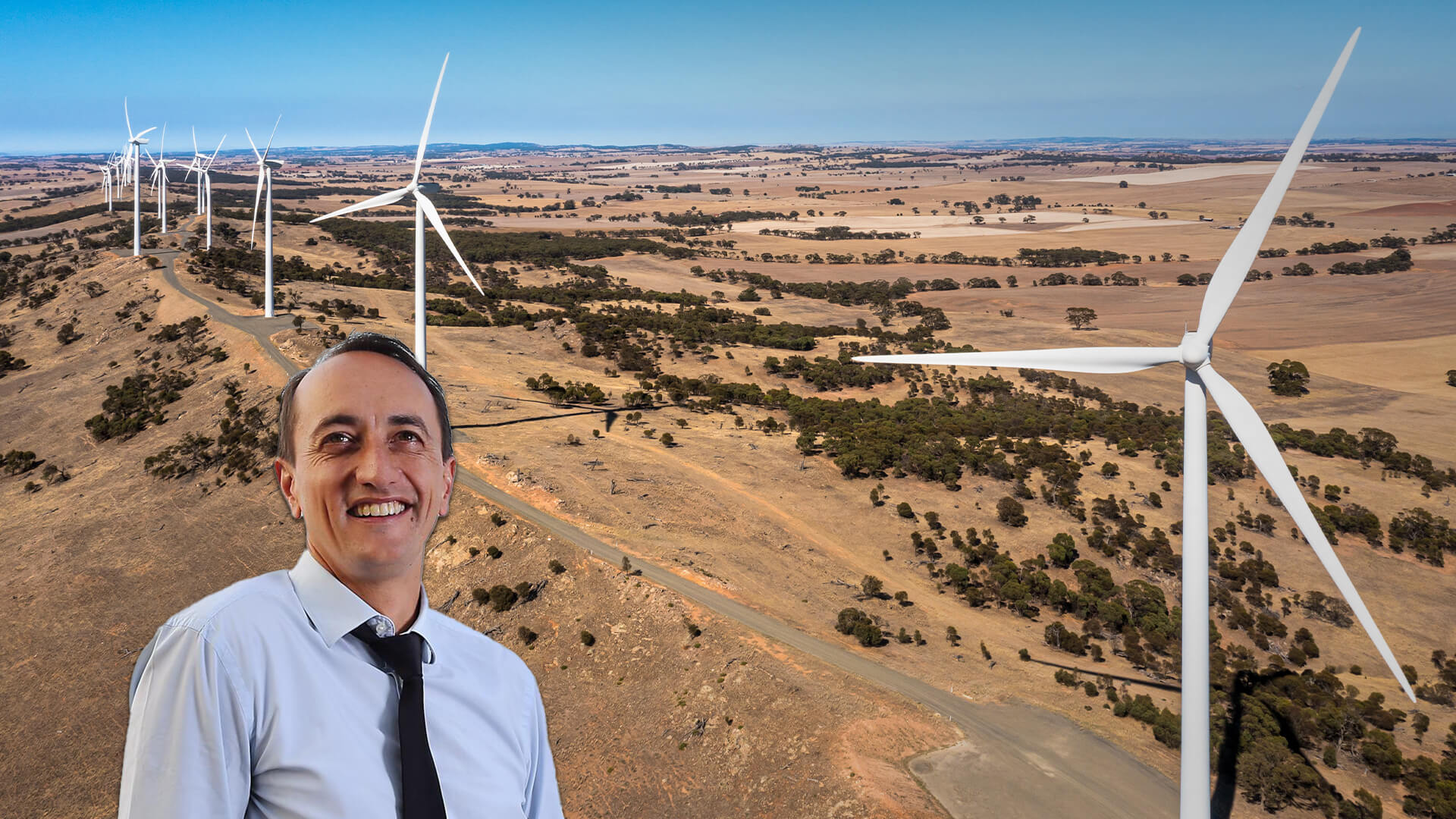 Prime Minister Scott Morrison better watch his back because the green “modern Liberals” of Bondi Beach and Lavender Bay are turning mainstream Australians away from what was once the party of common sense; and the worst part is that most of the hacks are totally unaware.

Every day ADVANCE gets letters from loyal Coalition voters who say they’ll NEVER back the party of Menzies again, and it’s little wonder why.

Millions of Aussies are fed up with the Coalition saying one thing before an election, and another thing after: think net zero, electric vehicles, gender quotes, free speech … the list goes on.

They’re sick of faceless lobbyists and their factional operators dictating preselections and policy from the shadows.

Most of all, they’re had enough of the “modern Liberal” cabal comprised of Dave Sharma, Trent Zimmerman, Katie Allen, Jason Falinski and co. calling the shots on industry and energy from some of the wealthiest parts of the world, while the majority are struggling.

One such example is an anonymous Coalition voter of over 45 years from Sharma’s seat in Wentworth.

Writing to his MP’s chief of staff Luke Barnes – the former spokesman of Liberal and Nationals for Gay Marriage – the anonymous voter wrote:

I speak for myself, but I’m aware that so many other Liberals now hold identical views to those expressed below, from former high office holders downwards. Were many persons from high-to-low afforded an opportunity to referee/re-visit their pre-selection decision to support Dave Sharma, they'd have voted for anyone but! That said: he represents a selfish and woke electorate, so he remains safely ensconced – for now.

Dave spent a lot of time trying to appease Malcolm Turnbull to gain his support, which was always a fool's errand. The silliness of his plan was explained to him, to no avail. Graham Richardson put it best (when voting for Turnbull as loser of the week), wearily observing: ‘but he loses every week’!

Dave speaks well on non-climate, foreign-policy matters, where his expressed clarity of thought markedly contrasts with his puerile green agenda type utterances about a subject of which he seemingly has no knowledge of at all. Worse still, his uninformed related advocacy threatens Australian living standards.

His inane statements such as: ‘get over it’, with regard to the alleged forthcoming green wet dream, infuriate those persons who are much better informed about these subjects than he is, and who know the damage that this nonsense is doing.

‘Green hydrogen’ was 20 years away 20 years ago, and takes much more energy to produce than other hydrogen forms, which at least could alternatively power heavy vehicles and perhaps aircraft instead of petrol, so might be a sensible alternative.

Satellite measurements taken indicate that the planet has warmed about 0.6 degrees celsius since either about 1910 or the late 1970's, excluding the very hot years between 1900-1910. The trouble with the BOM greenie graph showing alarming warming of about 1.6 degrees during the same time period, is that you can go to the library and look up the temperatures back to well into the 1800's when mercury thermometers were also being used.

Attached below are Greenland's temperatures for the past 8,000 years taken from ice rings. The climate has always gotten hotter and colder, and hotter, and colder. Greenland was so named during a hotter earlier period. 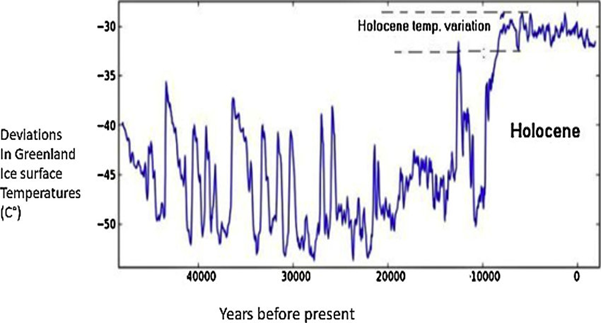 Fort Denison's tide levels have remained constant since 1880 since monitoring began, and NASA satellite photographs show that neither Tuvalu or Funafuti in the South Pacific have lost any land mass at all since the late 1970's, despite so many dramatic claims made to the contrary. 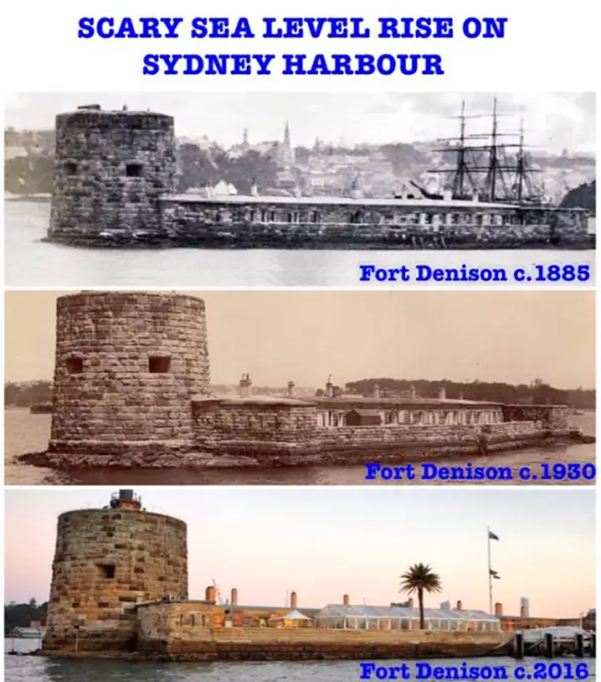 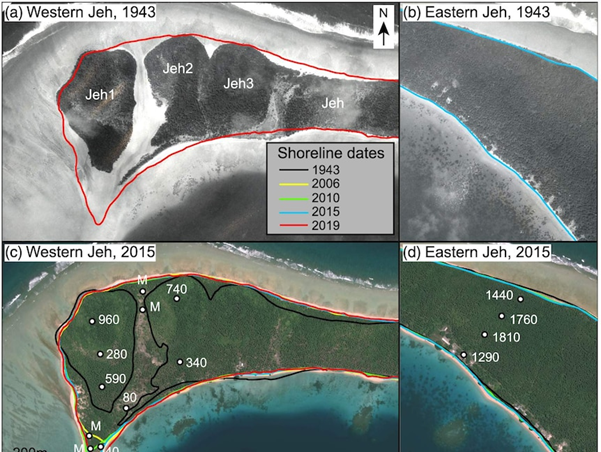 Of course, claiming global warming victimhood is a rewarding process for South Pacific leaders, and so much more profitable than trying to flog cowrie necklaces to tourists. Connie Fierravanti-Wells is best placed to wise Dave up in these regards, having dealt with these people so often as a Minister.

We previously lost northern Sydney and Byron Bay beaches to storms and weather erosion many times, but the same, perennially return.

Dave apparently thought that renewables were successfully helping to power Britain. Their horrendously expensive 10,900 windmills were supposed to meet about 20% of their power needs, but recently were supplying about 1.5% of the same. Their power prices are now going through the roof: wrecking manufacturing, and causing hardship and unemployment.

What is wrong with nuclear power, which is clean? Solar power shows great promise, and the panels on our roof have hugely reduced our power bills, but what happens in winter or at night is that [we] revert to the grid – as cheaper batteries can't always bridge that gap.

Of course, everyone wants to see progress, however, little is emitted from the modern coal fired power station, aside from steam. If renewables are cheaper then why have power prices almost trebled during the time period of their implementation?

Dave's efforts would be more productively spent trying to reduce ocean pollution, [land] pollution and environmental degradation. The world's herds have been emitting [methane] since evolution, especially large herds of bison and the like, without changing the climate.

His absurd liberal-generic-group has nothing to offer us climatically but lower living standards, in return for no environmental upside at all. We all saw what happened to the WA Libs last election: when they took us down that path [they] were decimated.

[The Coalition] only won in 2019 when Morrison took us back to the centre; and whilst Dave and “company” might celebrate a win when dragging him to the left, the likely consequence will be to lose the next election, unless we stop ridiculing ourselves climate-wise. Sensible Liberals intend to fight for the heart and soul of our party, and for both the living standards and environment of all Australians.

The recent Virginia election results portend what practical people really think of the likes of all the woke left-Liberals, who have no business being in our party and who should join the Greens. Labor should similarly be ashamed of deserting its working-class roots. Prince Charles may be a great global warming believer, but his late father, who did have a brain and who was a true environmentalist, apparently didn't believe a word of it.

If Dave and company are so certain of their climate facts, then they, Flannery and others, won't mind participating in a public debate on this subject with Professor Ian Plimer, so that the viewing public can draw its own conclusions as to fact and fantasy.

A disaffected Coalition voter of 45 years.