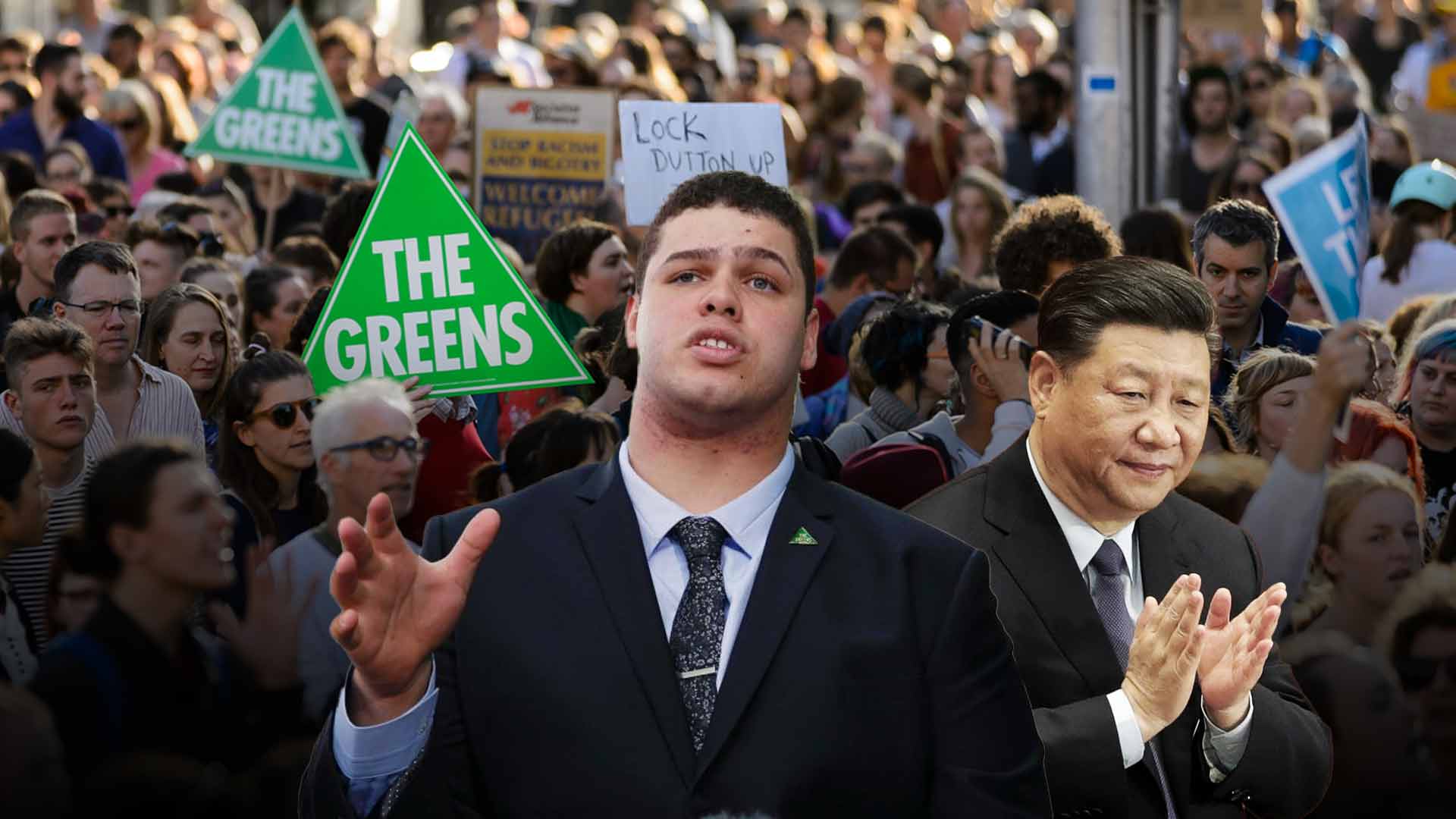 The biggest threat to Australia’s national security is NOT Xi Jinping.

The biggest threat to our national security is the Greens… and there’s NO DOUBT Each-Way Albo will give Adam Bandt and his Green-Left loonies a seat at the decision-making table if he needs extra numbers to form government after the May 21 election.

Have a listen to the Greens’ “peace and disarmament spokesman” Jordon Steele-John… a 27-year-old pommy who spent his short adult life fighting for “LGBTQ and disability rights”.

If given the opportunity in a Labor-Greens alliance, Jordon says he’d push for Australia’s defence spending to be slashed from about 2 per cent of GDP to 1.5 per cent.

He’d renegotiate the ANZUS alliance between Australia, New Zealand and the United States and “remove all foreign bases and foreign troops from Australian soil”. In other words, this means no more US Marines in Darwin, no more Pine Gap…all so we can “act independently in relation to our diplomatic relationships with other countries” (code for buddying up to Xi Jinping).

Jordan would tell the world Australia “doesn’t see China as a military threat to Australia” and that we have no issues with the Solomon Islands’ decision to forge a security partnership with Beijing.

In fact, Jordan says it’s “paternalistic and actually racist” for us to be concerned about a Chinese military base off the coast of Queensland. He even said the Greens “absolutely support the right of the Solomon Islands” to buddy up to Xi Jinping.

He says Australia should butt out of the affairs of Pacific states, arguing our neighbours should be free to “defend their territorial boundaries and build relationships” as they see fit.

Jordan would even let China invade Taiwan. He says the West should not become militarily involved in defending the territory from forced “reunification” with China. Instead, Jordan says Australia should “lead the international community” in addressing climate change and the existence of nuclear weapons as they are “the two greatest threats to global peace and security”.

This bloke is a FUNDAMENTAL threat to our national security, and ALL Australians have a responsibility to ensure their sons and daughters DON’T fall for the trickery of the Greens.

Although their carefully crafted image amongst our youth says otherwise, the Greens are NOT the party of hip young people who want to legalise marijuana and fund pill testing facilities outside doof-doof music festivals. They are NOT the party of artists and musicians who want more public funding for their weird performances. And they are NOT an edgy alternative to the two major parties that are losing touch with young people who’ve checked out of party politics.

The Greens are there to UNDERMINE Australian security. They are there to CONTROL the crossbench and force Labor into accepting their DELUSIONAL demands to rapidly go net zero and let boys use the girls’ bathrooms at school.

And they are run by LUNATICS like Jordon Steel-John – a man who thinks it “racist” for Australia to be concerned about the Chinese Communist Party building a military base in the Solomons.

As we’ve been saying here for months now…vote Labor, get Greens, and the Chinese Communist Party as the cherry on top.