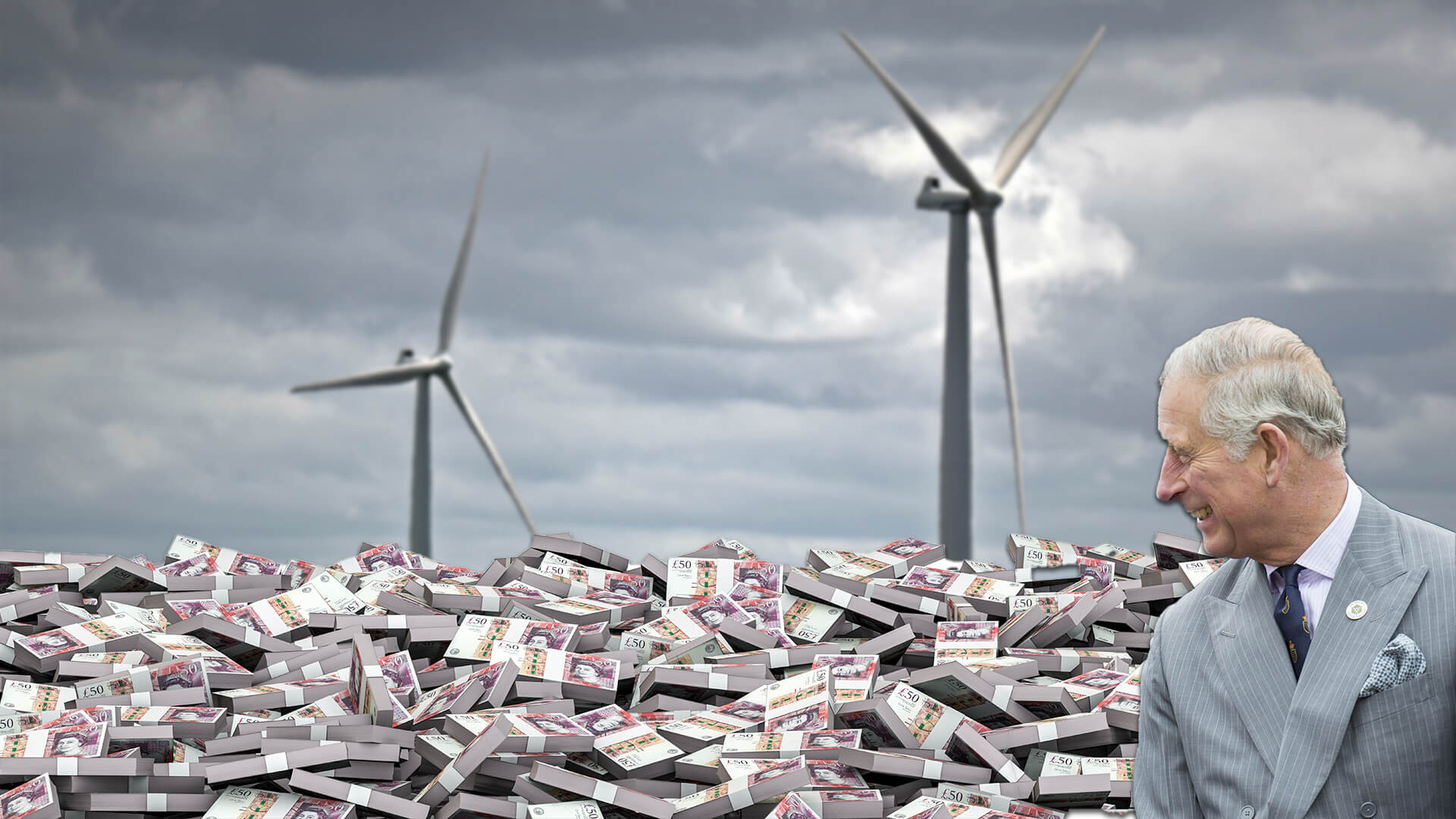 To figure out what’s really going on with wealthy green elites like Prince Charles who want a “vast military-style campaign” to “radically transform” the global economy towards a net zero future – just follow the money.

As reported by the Express Newspaper, former Member of European Parliament and successful businessman Lance Forman believes Prince Charles has a £2 billion motive to be pushing renewable energy.

Given the Queen owns the British coastline, Forman concludes “the Royal Family will gain over £2 billion in the next ten years from renting coastal seabeds to wind-farm operators”.

“Nothing wrong with that – but people should be aware that whilst Charles is so keen on renewables there's also a huge financial gain for him. Transparency please,” Forman said.

The Royal Family have already closed several deals in the space with many more to come.

It emerged in February that the Queen and the Treasury could receive an offshore wind farm windfall of up to £9 billion over the next ten years, as an auction of seabed plots attracted runaway bids from energy companies.

While the Queen has owned the British coastline since the existence of the Monarchy, the right to collect royalties from wind and wave power was only granted in 2004, under Tony Blair's Labour government. Since gaining these new rights, the Crown Estate, which manages the Queen's property portfolio, has sold sites in six areas in England and Wales to energy companies.

The Royal Family has even been dubbed “greedy” as it went on to lease an area off the Yorkshire coast to the latest phase of the giant Hornsea offshore wind farm at the same time as to a scheme led by BP that plans to begin storing carbon dioxide under the seabed.

An industry source involved in one of the schemes told The Guardian: “Put simply, the Crown Estate has been a bit greedy and leased one area to two projects at the same time.”

In 2007, the Prince of Wales reportedly bought shares worth $113,500 (£83,600), in a Bermuda-based company run by one of his best friends, Hugh van Cutsem. That friend was also a director of Sustainable Forestry Management, the board of which invested in land to protect it from deforestation.

The purchase of the shares was regarded as highly sensitive, The Guardian reports, and members of Sustainable Forestry Management’s board were reportedly sworn to secrecy about the Prince’s involvement.

As reported by the BBC, he mounted a high-profile campaign for changes to two major environmental agreements just weeks after Sustainable Forestry Management sent his office lobbying documents.

Four weeks after purchasing the shares, Prince Charles called for the Kyoto Protocol and the EU’s emissions trading system to recognise carbon credits from rainforests, saying it was “wrong”.

In October 2007, he launched the Prince’s Rainforest Project, which aimed to highlight the impact of tropical deforestation. And in January 2008 he released a video in which he called for new ways of supporting rainforests.

Sir Alistair Graham, former chairman of the Committee on Standards in Public Life, said the Prince’s actions amounted to a “serious” conflict of interest.

The BBC said: “There's a conflict of interest between his own investments of the Duchy of Cornwall, and what he’s trying to achieve publicly. And I think it’s unfortunate that somebody of his importance – of his influence, becomes involved in such a serious conflict.”

“It seems clear to me that Prince Charles could not have known or understood the nature of the investment in his friend’s company.”

If only Charles listened to his late great father Prince Philip who said wind turbines were “absolutely useless, completely reliant on subsidies and an absolute disgrace”.