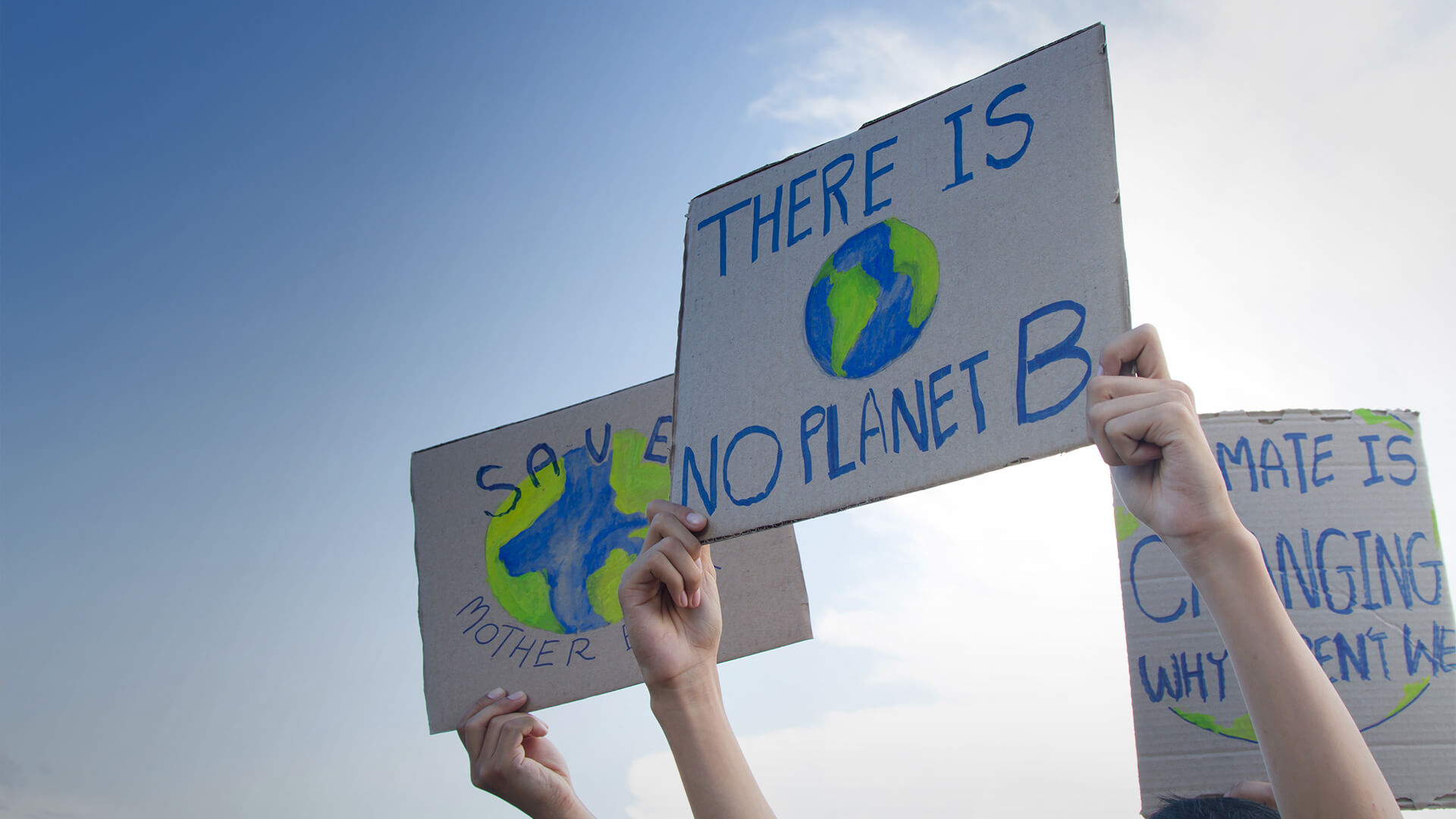 2021 may go down in history as the year that foretold the demise of the international climate cult.

To prove so, ADVANCE has listed the movement’s top ten biggest and underreported failures from last year below:

According to Special Assistant to former President Barack Obama, Jason Bordoff, winter and spring in much of the northern hemisphere was unusually cold and windless last year. As a result, Europe’s wind turbines failed, forcing the continent to rely on natural gas plants given that green politicians shut down their coal-fired power plants over the last two decades. Europe’s reliance on natural gas caused gas prices to skyrocket and a global energy crisis to precipitate. Energy companies failed, manufacturers and fertiliser plants shut down, 30 million extra Europeans were plunged into energy poverty and western Europe was forced to rely on Russian gas to keep the lights and heaters on. The most ironic part? Emissions increased in Europe during 2021… 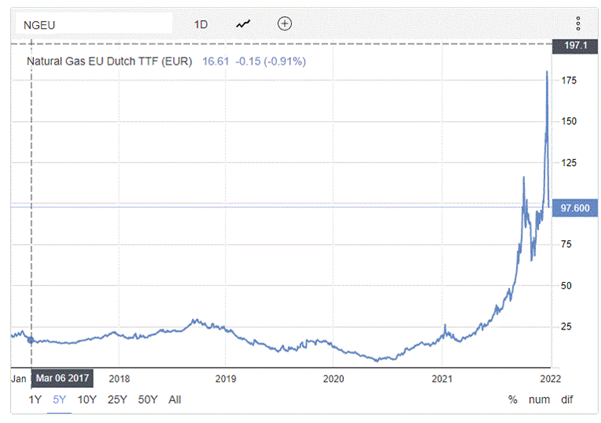 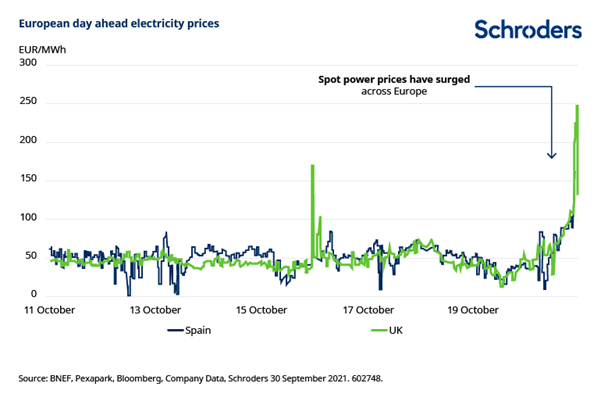 In early 2021, at least five million Texans were left without power during a blizzard that froze half the state’s wind turbines. As a result, more than 200 people died, wholesale energy prices increased by 10,000 per cent and the Electric Reliability Council of Texas had the gall to ask “Texans to take some simple, safe steps to lower their energy use during this time.” Although the media sheepishly blamed the state’s back up natural gas facilities for failing to fill the gap left by the frozen turbines, the natural gas plants weren’t equipped to do so because green politicians assumed wind turbines could produce up to 30 per cent of the state’s energy needs even in the freezing cold.

Prior to the FLOP26 United Nations climate gabfest, the commentariat declared the conference would be the final nail in the coffin for the coal industry. Biden said it had the goal of “consigning coal to history”. Greens leader Adam Bandt “Australia is widely regarded as the villain of the summit” because it refuses to “quit coal and gas”. The ABC and mainstream media agreed. The reality? Neither Xi Jinping nor Vladimir Putin rocked up to the conference. Indian Prime Minister Narendra Modi pushed back his country’s net zero goal until 2070. Biden’s move to zero out the US coal industry by 2030 was blocked by his fellow Democrat colleague Joe Manchin. In other words, the world’s largest emitters will keep emitting for half a century while the Greens demand Australia (which produces a mere 1.3 per cent of global emissions) reach net zero within the decade.

4. Biden’s war on fracking increases energy prices and makes the US dependent on OPEC once again

When running for president one of the Biden campaign’s central policies was to ban fracking, and the man has certainly lived up to his promise. Last year, Biden cancelled the completion of the Keystone XL Pipeline; he suspended oil and gas leases in the Arctic National Wildlife Refuge and New Mexico; his EPA announced new regulations for methane emissions from oil and gas production, transmission, storage, and distribution; he put a moratorium on oil and gas leasing on federal land; and he vowed to prohibit fracking. The consequences? As of the 29th of December 2021, the national average fuel price in America increased by 45 per cent relative to prices a year before. High natural gas prices forced the US to burn 20 per cent more coal. Far worse however was Biden’s destruction of the American energy independence President Trump pioneered. According to the U.S. Energy Information Administration, the US will import 62 per cent more crude by 2022 due to domestic production declines derived from Biden’s green politics, meaning the world superpower is once again reliant on OPEC – an organisation run by tyrants.

As reported by Bloomerg News, Blackrock, Disney and JPMorgan Chase have been caught buying phoney carbon offsets that were sold for trees that were never in any danger of being cut down. For instance, JP Morgan paid almost $1 million to preserve forestland in eastern Pennsylvania; Disney spent hundreds of thousands to keep a Pennsylvanian city from harvesting a forest that surrounds its reservoirs; and investment giant BlackRock paid thousands to the city of Albany to refrain from cutting trees around its reservoirs. However, in all of those cases, the land was never threatened; the trees were already part of well-preserved forests. Yet still, Blackrock, Disney and JPMorgan Chase tout these projects as an important mechanism for slashing their own large carbon footprints and doing their part to stop the so-called “climate crisis”.

For years now, climate activists have tried to use the Federal Reserve – the central bank of the United States – as a tool of the climate cult given it has a license to print money (note: the Fed printed over 40 per cent of total US dollars in circulation in the last year alone). The climate hysterics demand the Fed print money to fund Biden’s Green New Deal. They want the Fed to pressure American banks to stop lending to the fossil fuel industry. The activists also want the Fed to finance the transition of poorer nations to net zero emissions. However, the Fed has refused. In a report titled “How Bad Are Weather Disasters for Banks” the first two words in the abstract answered the question: “Not very” – contradicting Biden’s ridiculous claim climate change is an “emerging and increasing threat to U.S. financial stability.”

7. Americans and Aussies are not interested in paying extra for “climate action”

Although journalists think they speak for the majority, figures released in 2021 proved them wrong. According to a poll commissioned by the American Associated Press, only 50 per cent of these polled are willing to pay $1 more a month for electricity. The same trend is present in Australia. According to a poll conducted by Newscorp, 87 per cent of Australians would refuse to pay any more than $50 per month so the nation reaches carbon neutrality. Given the world’s only independent estimate of net-zero cost from New Zealand found a net-zero target by 2050 would cost at least 16 per cent of GDP every year, if Australia went net-zero the cost would be $212,960,000,000 in GDP every year. Dividing this figure by the Australian population, you get $8,290 per person per year or $691 per month in GDP terms – 14 times more than the $50 per month 87 per cent of Australians would be willing to pay to reach net-zero emissions.

Although the green lemmings would say otherwise, coal has never been doing better. As reported by the International Energy Agency in its “Coal 2021” report, the 2020 collapse in coal demand turned out to be smaller than anticipated; coal-fired power generation is set to reach an all-time high in 2021; global coal demand may well hit a new all-time high in the next two years; coal production is set to rise to its highest ever levels in 2022; and coal prices reached record highs in 2021. The IEA concluded: “the pledges to reach net zero emissions made by many countries … are not yet visible in our near-term forecast, reflecting the major gap between ambitions and action. The fate of coal depends on how quickly and effectively countries move to implement their net zero commitments.”

According to Member for Mirani Stephen Andrew, the shortage of urea – an organic compound used in fertiliser, feed and key fuel additive AdBlue – is likely caused by recent United Nations regulation on greenhouse gases in shipping. The new regulations give ships three options going into the future: use more expensive fuels, use LNG natural gas or install costly “scrubber” technologies. Option one has led to shortages of diesel/jet fuel, option two has increased the price of gas, while option three has caused the number of scrubbers on ships to double this year. As Stephen wrote, ship scrubbers “use the same Selective Catalytic Reduction technology (SCR) that trucks do. And like trucks, ship scrubbers require copious amounts of ‘Diesel Exhaust Fluid’, AKA AdBlue. So, a whole new market for AdBlue, or AUS40 – with 40 per cent urea compared to 32 per cent for AdBlue – was created virtually overnight.” Hence the shortage that threatens to cripple Australia’s trucking industry.

10. Cooler and wetter climate conditions in 2021 not reported by lamestream media

Every time temperatures reach record highs or conditions are especially dry, the media wets the bed with doomsday headlines blaming human-induced climate change. The same doesn’t apply when it’s the other way around. For instance, in early 2021 all-time cold records were broken or tied at 219 locations in the central states, extending from North Dakota and Wisconsin to Texas, Arkansas and Louisiana. In Australia, November 2021 was the wettest November in 122 years of record, surpassing the record set in November 1973. Even Antarctica experienced a similar shock. In 2021, the South Pole recorded its coldest winter since 1957, with the average temperature at the Amundsen–Scott South Pole Station between April and September, a bone chilling minus -78 degrees. As a result, sea ice levels surrounding the continent rose to their fifth-highest level on record in August, according to the National Snow and Ice Data Centre. 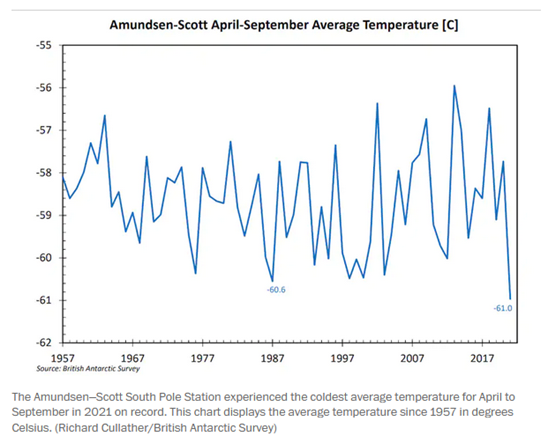