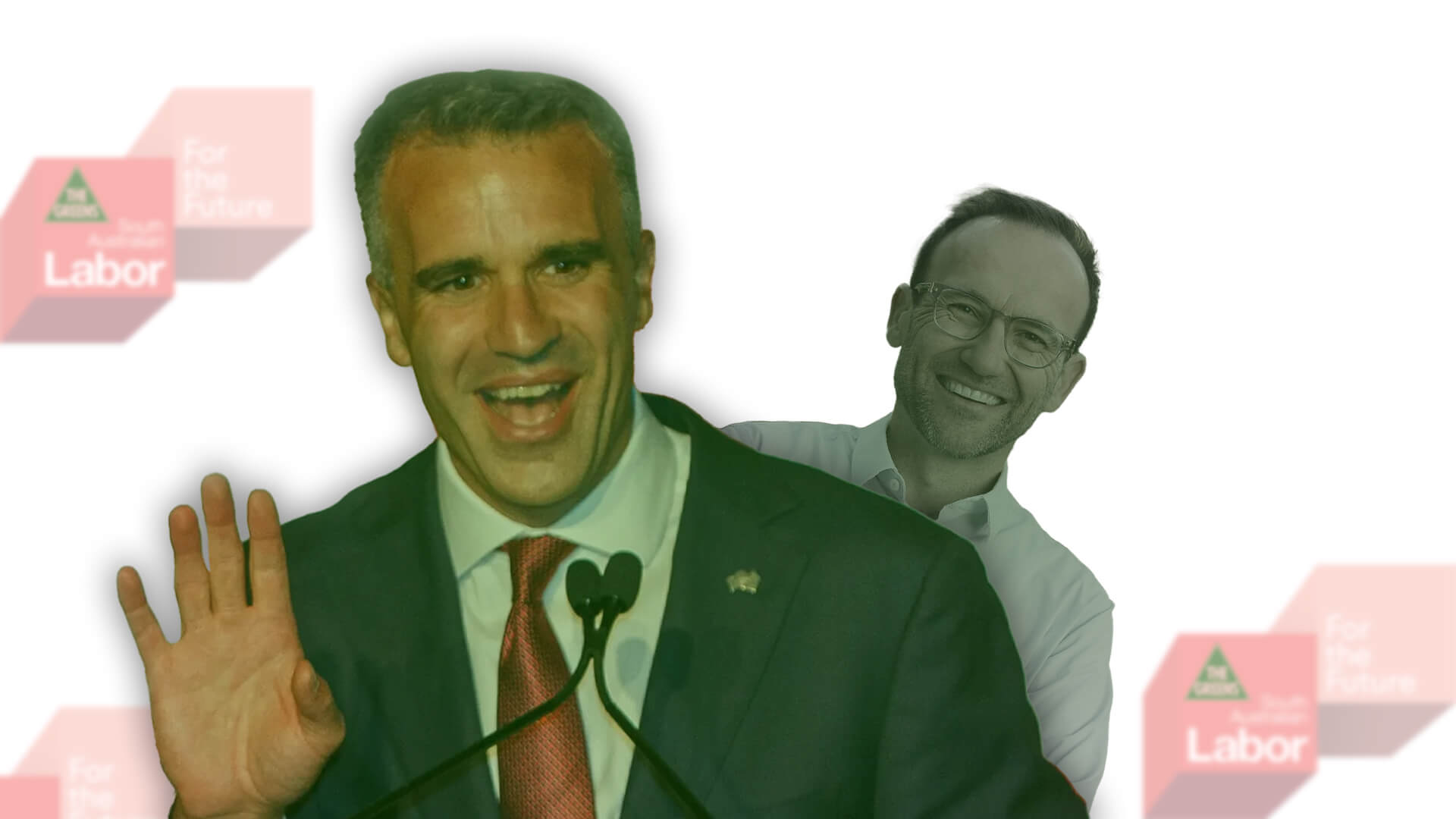 We can’t make ourselves any clearer here at ADVANCE: vote Labor, get Greens. Unfortunately, the people of South Australia are about to learn the lesson the hard way.

As most would’ve heard by now, Labor steamrolled the incumbent Liberals in the South Australian state election on Saturday. In fact, the results are so terrible for the Libs that Deputy Premier Dan van Holst Pellekaan will lose his seat and it looks like Premier Stephen Marshall may face a similar fate.

Of course, on the other side of the aisle, Labor leader Peter Malinauskas couldn’t be happier.

With around 55 per cent of the vote counted, it looks like Labor has gained a 7.6 per cent swing. As a result, there’s no doubt Labor will enjoy a majority in the South Australian parliament for the first time in a little while. And although the soon-to-be Premier Peter Malinauskas comes from the more sensible right faction of the Labor party, the very first words of his victory speech told us what South Australians are in for under the new government.

Pete began his speech by saying, “I stand here with my feet firmly on the lands of the Kaurna people. I pay my respects to their elders, past, present and emerging.

“But the way we pay our respects – first and foremost - is not with our words, but with our deeds. And I affirm to every one of you here tonight and the people across our state, that I very much look forward to for the first time in the history of our Federation having initiated an Aboriginal man leading our states’ Aboriginal affairs movement.

“I am also looking forward to actively delivering on a state-based voice treaty and truth for the Aboriginal people of South Australia.”

Mate, that’s a Greens policy that will do NOTHING to stop the abuse of Indigenous children in remote communities – just a shallow virtue signal to appease the woke left faction of the Labor party.

Not a good start…!

Next Pete proceeded to thank everyone from his family to the unions, and concluded with several euphemisms including, “let them say that this generation realised the opportunity of a clean energy future and all the jobs it can provide”.

It gets even worse when you visit Pete’s website.

Online Pete boasts how his government will “encourage South Australians to buy an electric vehicle by repealing the electric vehicle tax” – meaning those who can afford a $70,000 Tesla don’t pay any tax on the road while the average punter with his diesel/petrol car pays tax on every litre of fuel he consumes.

When it comes to the Murray River, Pete wants to take more water off farmers so it can be released into the environment by the bureaucracy – a policy that has crippled farmers during drought and failed to protect the environment.

Pete even buys the hydrogen furphy, declaring that his “Hydrogen Jobs Plan will power new jobs and industry through the building of a 250MWe hydrogen electrolyser facility, and a 200MW hydrogen power station.”

Those numbers are pretty modest, mate!

Good luck explaining to the South Australian people why they’re facing blackouts on a cloudy, windless week during a gas supply shortage as predicted for the next few years by the ACCC.

We’ve said it countless times, and we’ll say it again…

Although ADVANCE and our 190,000+ supporters get it, unfortunately a significant part of South Australia doesn’t.