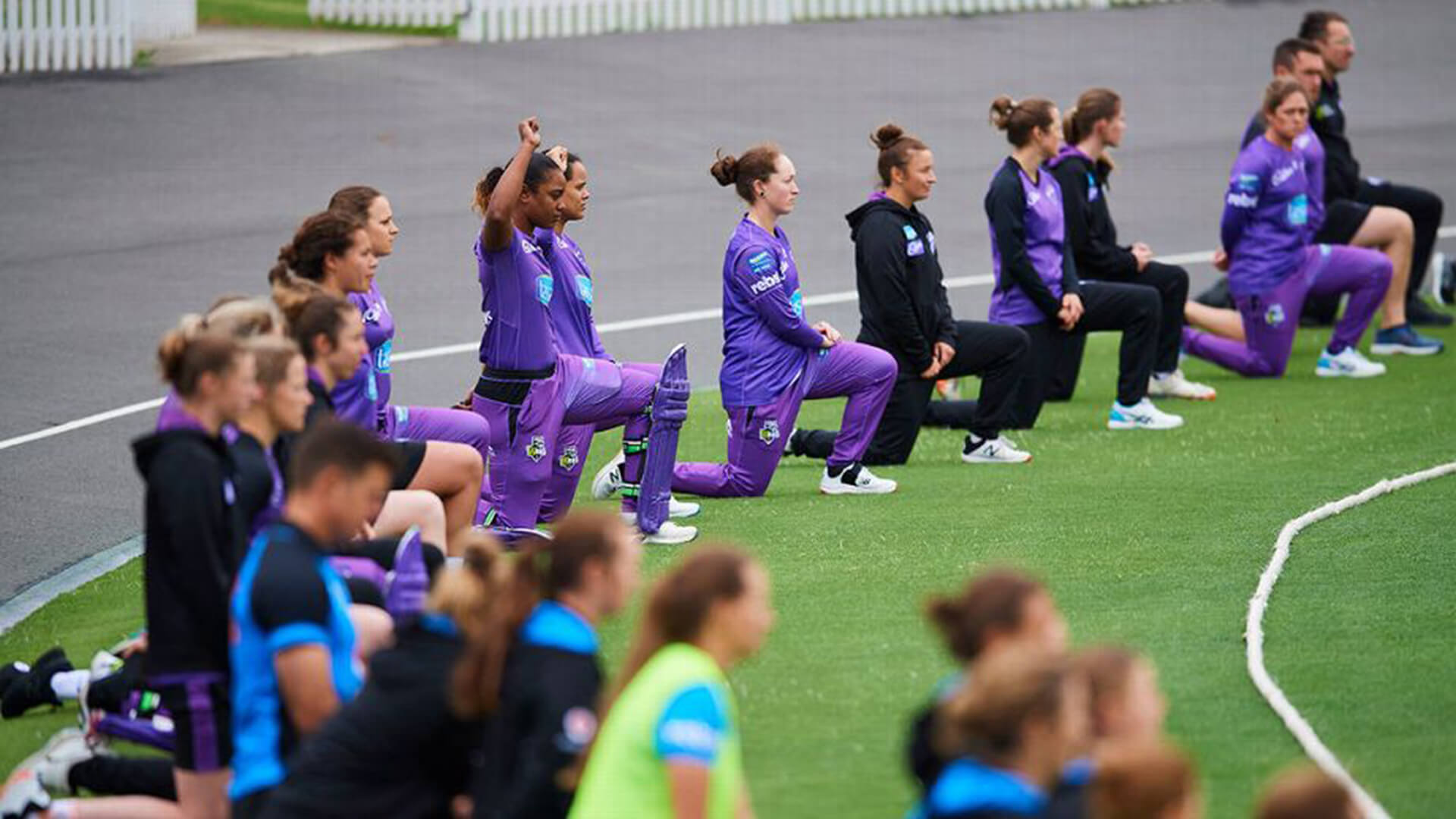 After it was reported last week that they would find other ways to honour indigenous people, Cricket Australia’s womens teams have repeatedly taken the knee to pay homage to the radical Marxist movement, Black Lives Matter.

On Sunday it was the Adelaide Strikers and Hobart Hurricanes.

Yesterday it was the Sydney Thunder.

“For us it’s not just going to be a one off thing, we’ll do it before our games, we’ve committed to that regardless of whether the match starts,” Sydney Thunder captain Rachael Haynes said.

“…obviously we are totally against racism,” she added, illustrating the cluelessness of those who believe that’s all there is to the display of BLM subservience.

If WBBL Thunder think that taking-a-knee to a US neo-Marxist outfit advocating defunding the police, gender fluidity and attacking the nuclear family is the best way of building their fan base in Western Sydney, they must love playing in front of small crowds.

It’s real overkill given Australia’s female cricketers are already continuing a rite that started last season: taking part in an Indigenous barefoot circle ceremony before each match of the first round of the WBBL tournament.

In addition, players are wearing the Walkabout Wickets emblem, designed by Aunty Fiona Clarke, on their team strip.

And of course the entire league will be celebrating Indigenous culture during NAIDOC week next month.

So how much virtue-signalling is enough?  Why take the knee, implying that white people are sorry racists, as well?

Has the pile-on by BLM activists made players so panicked about appearing racist if they don’t toe the BLM line?

Haynes says that besides “reinforcing our commitment against racism in this country and around the world” the “symbolic and sensitive” gesture is “another learning opportunity, to understand why we’re recognising the piece of land we’re playing on and the people it belongs to”.

Ah the old ‘Always Was Always Will Be’ chestnut.  How divisive can you get?

Sport is and should remain a unifying factor in Australia.  Love of the game has always transcended colour and creed the world over.  Politics should be kept out of it at all costs.

It’s a shame our women’s cricket teams didn’t take their cue from Rugby Australia’s national men's team which, to date, has stood their ground in refusing to pay homage to BLM.

Unfortunately, Coach Justin Langer has admitted that the team has been caught out and needed to engage with issues of racism in sport and society.

Why, Langer?  How is any of this empty virtue-signalling helping indigenous Aussies in any way?  Keep politics out of sport, mate – don’t let the left ruin everything.

No Aussie tunes into a game to watch our players fuel white guilt and black victimhood.  We tune in because we love our sport, our players, our teams and the unity that brings.

Let’s keep it that way.